Lee Lorch is a mathematician, social activist and a retired member of York University's faculty. From 1942-1943, Lorch worked as a mathematician for the US National Advisory Committee for Aeronautics. He married Grace Lonergan, a school teacher from Boston on 24 December 1943. During World War II, Lorch served in the U.S. Army, working in India and the Pacific.

After 1946, the couple settled in New York City with their young daughter in Stuyvesant Town, a private planned housing community whose tenants were veterans. Lorch, by then Assistant Professor at the City College of New York, petitioned the developer, Metropolitan Life, to allow African-Americans to rent units. In 1949, pressure from Metropolitan Life led to Lorch's dismissal from CCNY. When the family moved so Lorch could teach at Penn State College, they allowed a black family, the Hendrixes, to occupy their apartment in violation of the housing policy. Under pressure, Penn State College dismissed Lorch in April 1950, after which he was hired as Associate Professor at Fisk University, a historically-black institution in Nashville, Tennessee. 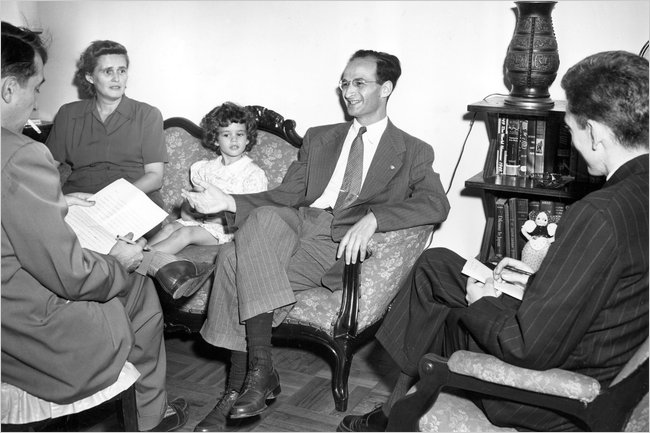 Here is a video from the New York Times featuring an interview with Lee Lorch here.

In response to the Brown vs Board of Education ruling by the U.S. Supreme Court, the Lorches attempted to enroll their daughter in the closest high school to their home in 1954, which previously had been all-black. As a result, Lorch was called before the House Un-American Activities Committee in September of 1954, where he refused to testify regarding his political affiliations and civil rights activities. Under pressure from its white-dominated board of directors, Fisk University fired Lorch in 1955.

The family moved to Little Rock, Arkansas, where Lorch found work at a local college. On 4 September 1957, during the Little Rock Central High School Crisis, Grace Lorch intervened to protect Elizabeth Eckford (one of the "Little Rock Nine") from an angry white mob. In October Mrs. Lorch was also subpoenaed to appear before the United States Senate Internal Security Subcommittee (chaired by Mississippi Senator James Eastland). After receiving death threats and finding dynamite in the family's garage door, Lorch resigned from Fisk.

After working as a visiting lecturer at Wesleyan University, Lorch was hired in 1959 by the University of Alberta. In 1968, Lorch joined the Mathematics Department at York University, where he remained until his official retirement in 1985. Grace Lorch passed away in 1974.

Below are excerpts from a series of letters Grace Lorch received from across North America and as far away as New Zealand and Belgium from well wishers following extensive media coverage of the events in Little Rock in 1957.

Scott W. Williams. "An Appreciation to Lee Lorch" The Mathematics Department of The State University of New York at Buffalo; Internet; available from: http://www.math.buffalo.edu/mad/special/lorch-lee.html; accessed 24 February 2012.