In honour of Remembrance Day, the archives has installed an exhibit of letters written by servicemen and women during the First and Second World Wars.  A complement to the online exhibit Letters Home, patrons can browse the physical exhibit material now on display on the second and third floors of the Scott Library. Edwin Miller (Ted) Aplin (1909 -1973) was born in Devon, England. He immigrated to Canada in 1930 where he met his future wife Elinor Grave Leef. They had four children: Nick, Frank, Dave and Jacqueline.

Aplin was active in the years before WWII in the League for Social Reconstruction, the Canadian Civil Liberties Union and the Committee to Aid Spanish Democracy, and was a member of the Cooperative Commonwealth Federation. He enlisted in the Royal Canadian Air Force and was stationed in Toronto, Camp Borden, Trenton and Belleville. In December 1944, he left Canada for England and, after the Nazi surrender, was stationed at Celle, Germany as part of Royal Air Force 84 Group Disarmament HQ Unit.

Being stationed near the Bergen-Belsen Concentration Camp, Aplin became interested in the welfare of the camp victims, many of whom were interned at Bergen-Belsen long after its liberation. To aid the survivors, he organized a system using the Armed Forces Postal System to put internees in contact with their families and friends, and collected goods from Canadian families for distribution at the camp. His work at Bergen-Belsen led many survivors to refer to him as "The Angel of Belsen."

The archives holds letters written by Ted Aplin to his wife Elinor during WWII. The archives also contains personal documents and material accumulated by Aplin’s sons for a commemoration ceremony celebrating the 50th Anniversary of the liberation of the Bergen-Belsen concentration camp in 1995.

The Bartlett family was based in Plymouth, England.  Thomas Bartlett and his wife Florence Emily Fortune had four sons, Alan, Edward, Richard and Jack.  Thomas died during the flu epidemic in 1920 and his son Alan died of flu in 1926. During WWI Florence served as a nurse in Plymouth. The remaining Bartlett sons emigrated to Canada with their mother and settled in Ontario.  All three sons served during WWII.

Ernest Henry Bartlett enrolled in the navy in England in the 1920s but influenza kept him from serving. Once in Canada he found work on a Great Lakes freighter before illness forced him to resign. He eventually found work as a journalist with the Toronto Telegram from 1924 to 1969, where he was the local expert on naval issues.  He became the paper’s travel editor in 1962.

Ernest enlisted as a public relations officer and war correspondent with the Canadian navy in WWII.  He filed news reports on the war effort in the Pacific and Atlantic.

On 14 August 1943, the motor torpedo boat that Bartlett was aboard was shelled in the Straits of Messina between Sicily and Calabria. He and his shipmates were captured and sent to a German POW camp in Marlag und Milag Nord. The camp was liberated 2 May 1946. Portrait of the Bartlett brothers: from left, Ernest, Jack and Rick.

Robert M. Laxer (1915-1998) was a psychologist, professor, author, and political activist. Laxer was born in Montreal, Quebec in 1915. He graduated from McGill University with a B.A. in 1936 and an M.A. in 1939. He later received his doctorate in clinical and learning psychology from the University of Toronto in 1962. Between 1938 and 1941, Laxer was a freelance journalist, and later served in the Canadian Army overseas.

The exhibit features a letter written by Laxer to his two-year old son Jimmie (York Professor of Political Science, James Laxer) on his second birthday.

The Lennox family had traditional roots in Simcoe County but Wilfred Lennox and his wife Fannie Watt met and married in Toronto in 1916.  Wilfred, a graduate of the Ontario Agricultural College, worked in the Federal Department of Agriculture in the Plant Products Division. The couple had three children, William (Bill), John and Elizabeth (Bettie). During World War II, Wilfred Lennox was seconded to the Wartime Prices and Trade Board in Ottawa while his sons Bill and John joined the Royal Canadian Air Force. John Lennox eventually shipped overseas to Scotland in February of 1942.  In January 1943 he received his letter of commission as pilot officer in England and was assigned to the 405 Pathfinder Squadron, which participated in bombing missions over Germany in May of 1943.

On the night of May 4th or 5th 1943, during his seventh sortie in a Halifax bomber with other allied bombers targeting Dortmund in the Ruhr valley, Lennox and his crew were shot down along the German-Dutch border.  John Lennox and his air gunner, Bernard Moody were killed, but the remaining crew survived.  Lennox was one month short of his twenty-third birthday. 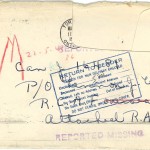 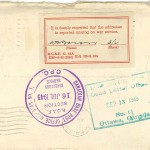 The archives holds correspondence between John Watt Lennox, his friend and fellow pilot Richard Palmer, and his parents and his little sister Bettie. Dr. John Lennox, professor of English at York University, along with his aunt Elizabeth Lennox Locke, donated the WWII correspondence of the Lennox family to the archives in 2009.

Margaret Dillon (1920-), writer, teacher, broadcaster and pioneer in distance education, was born in Toronto to a well-educated family of modest means. She attended the University of Toronto where she earned her B.A. and M.A. in sociology.

From 1944 to 1946, Norquay was a welfare officer with the Canadian Women's Army Corp (CWAC), where she managed social problems amongst members of the armed forces stationed in New Brunswick.

During her time in New Brunswick, Margaret wrote to her father and mother, reflecting on her work in the CWAC and her concerns about post-war employment for both male and female military personnel.  Copies of these letters can be viewed in the exhibit.

Thomas W. and Katherine Shore lived on a farm they owned in Sebringville, Ontario during WWI. They had at least one son, Charles William Shore (b.1899) and one daughter, Jennie.

Misrepresenting his age, Charles enlisted in the military in 1916, and was sent overseas to England where he served as a mess orderly in the early stages of the war.

His family's efforts to have him discharged on the grounds that he was underage were rebuffed by the war office, although officials promised not to send him to France before he turned 19. He was eventually sent to France about the time the war ended.

Vicki Ryckman found approximately fifty letters belonging to the Shore family in an old barn in Prince Edward County when she was growing up. She donated them to the archives in 2008. Gordon Stepler was a student at the University of Toronto when he signed up to fight as a gunner with the 67th Varsity Battery in March 1916.  A native of Strathroy, Ontario, Stepler was shipped out to England for training in June 1916 and arrived in France in February 1917, just in time to participate in the Battle of Vimy Ridge.

Stepler, in addition to maintaining a correspondence with his parents and sister Dorothy, kept a series of diaries detailing his activities and experiences in the trenches and on campaign in Belgium and Germany.  He also took photographs of the regiment’s journey out of Cologne, Germany and back through Fumal, Belgium before being returning to Canada in April 1919.