Coffin, N. A System of Drill, for the Militia, of Upper-Canada. York: Printed by Robert Stanton, 1830. 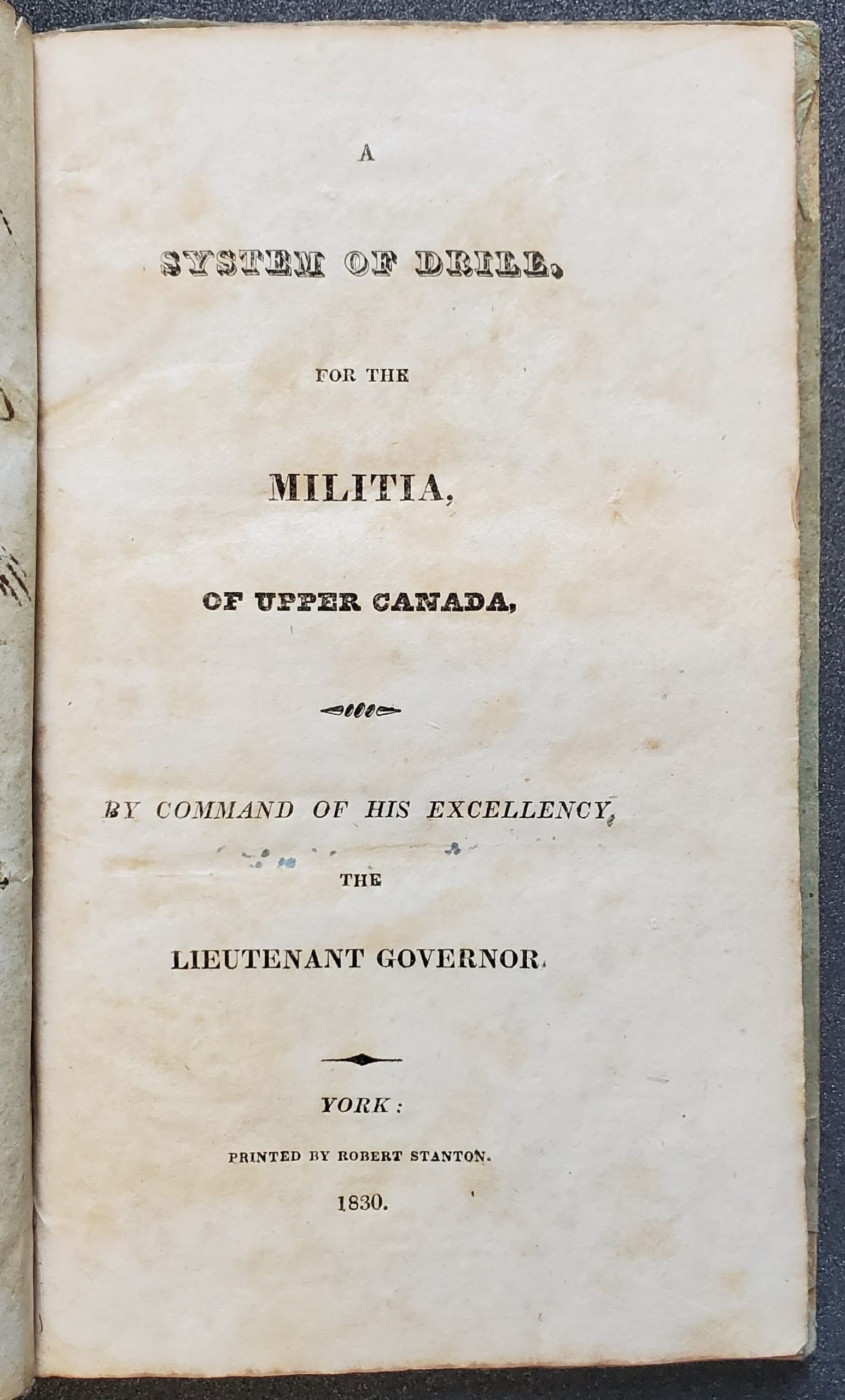 Published before Confederation, and even before the incorporation of Toronto in 1834, this short work outlines instructions for equipment and movement drills, and battalion and platoon exercises. These exercises were important in a time when precise movements were needed on the battlefield to outmanoeuvre the enemy and often encompassed separate procedures for cavalry, artillery, and infantry. It was also meant to promote discipline, precision, and cohesion among the soldiers. Today drill is largely ceremonial, but it is still used to move troops and the Canadian military still has a manual much like this one.

This copy was also acquired because of its provenance, or chain of custody since its creation. Other than bookplates there are many indicators of a book's history. In this case there was an inscription, an informal dedication to a person. In it we discover that the book was given to John Bagwell Junior by "Col. James Fitzgibbon, commanding the 2 West York Militia." James Fitzgibbon served as acting adjutant general during the Upper Canada Rebellion of 1837, warning of an attack on Toronto and eventually defending it from William Lyon Mackenzie's forces. However, Fitzgibbon is most remembered for his participation in the War of 1812 both in traditional battles, and guerilla-style fighting with a group of men known as the "Green Tigers" and "Bloody Boys." It was Fitzgibbon that Laura Secord warned about the advancing Americans leading to the British victory at the Battle of Beaver Dams. 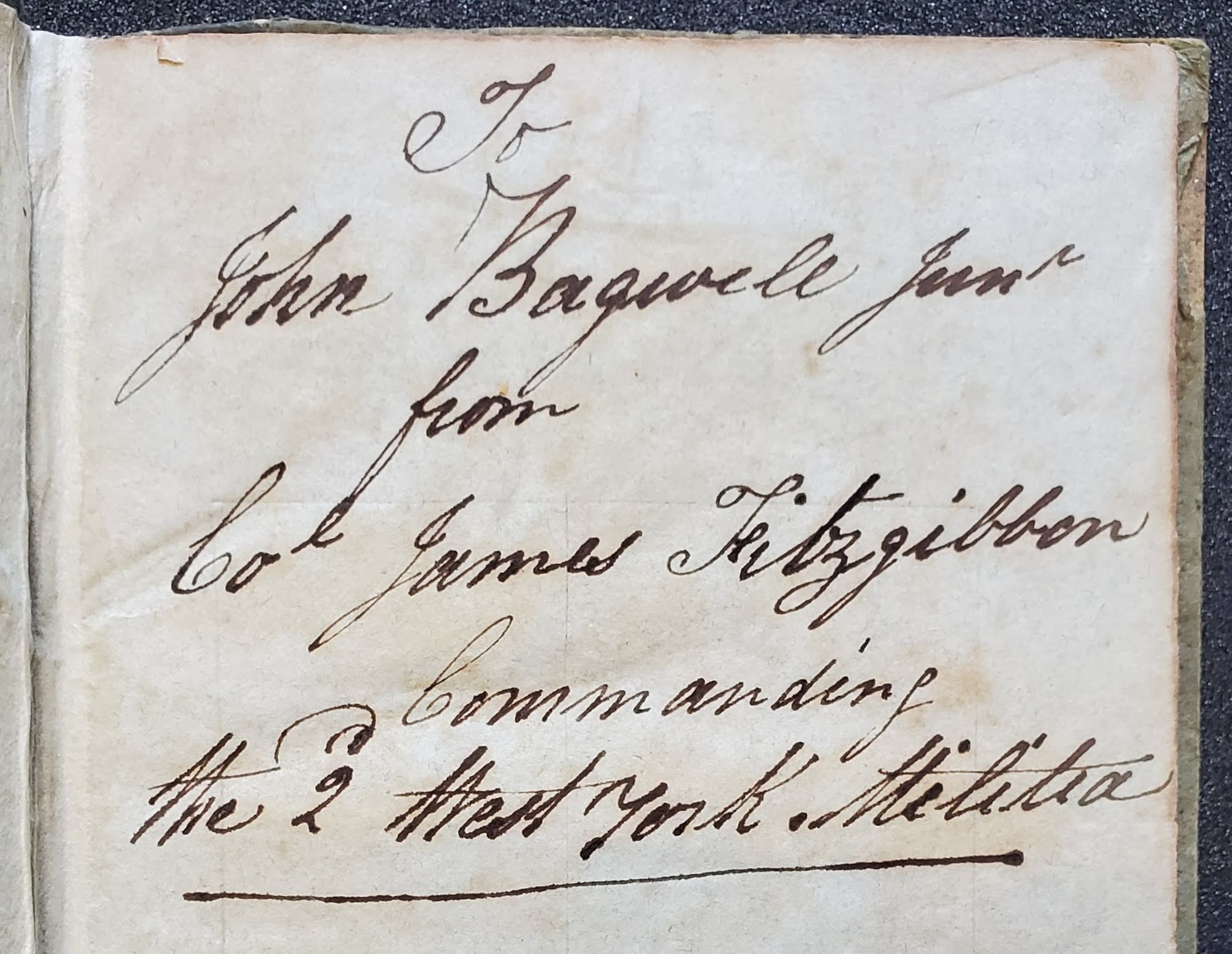 Provenance encourages us to look at books as artefacts, to look beyond the content and recognize that books are physical objects. When we discuss provenance, illustration techniques, bindings, editions, and pirated copies in these blog posts, we are looking at these books as objects, how they were constructed, how they were used outside reading, and how they were passed down through time. Like any object there are also unintended uses to consider. Commonly blank pages in books were used for purposes completely unrelated to the content of the book. In this case, the last pages were used to draw a floorplan. Information on the house the image represents, who drew it, and the reason the layout was drawn are long gone, with only speculation left. However, it does reveal how books were used outside reading. 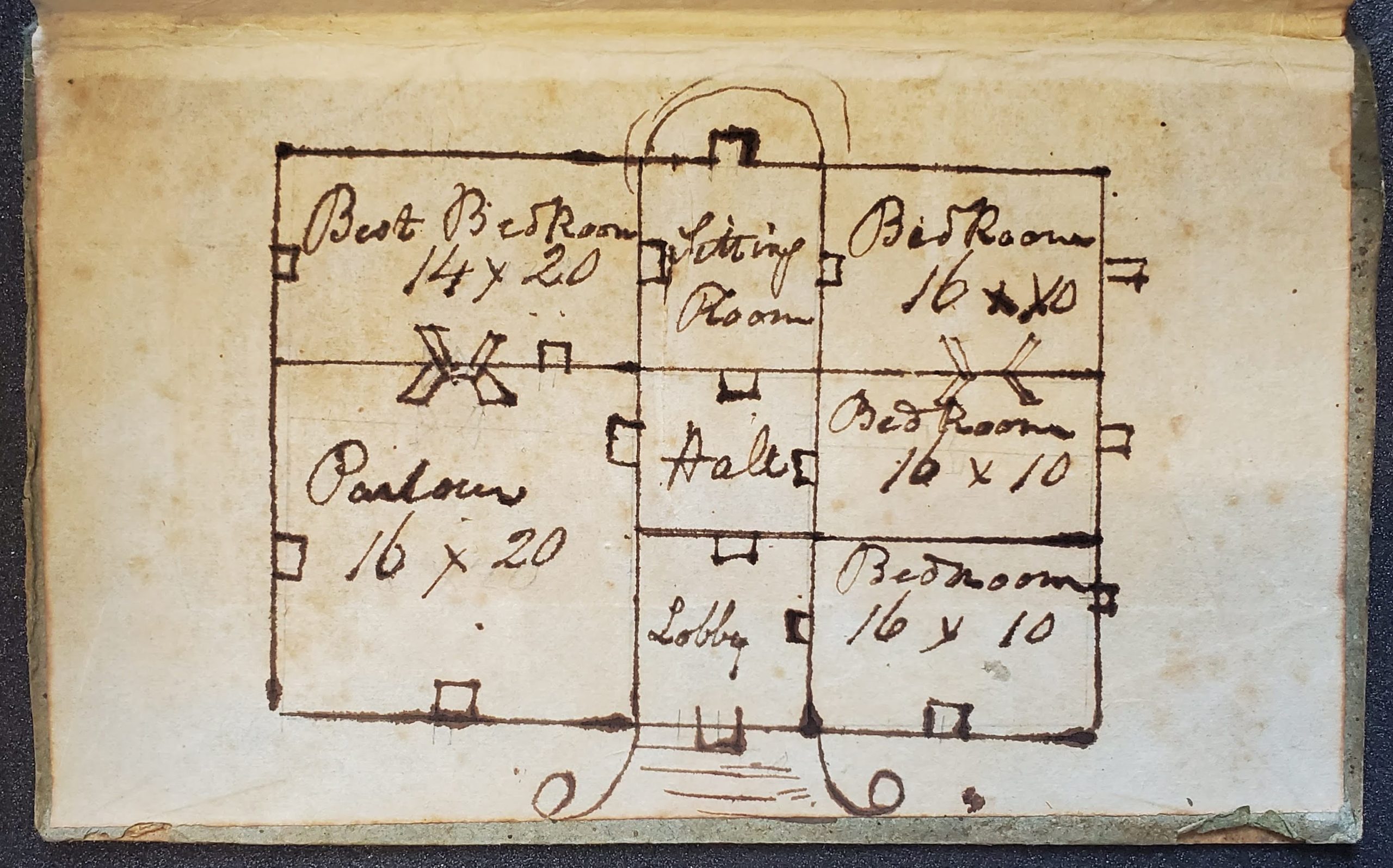 Sturmy, Samuel. The Mariner's Magazine, or, Sturmy's Mathematical and Practical Arts: containing, the Description and Use of the Scale of Scales, it being a Mathematical Ruler that Resolves Most Mathematical Conclusions... London: Printed by E. Cotes for G. Hurlock, W. Fisher, E. Thomas, and D. Page, 1669. 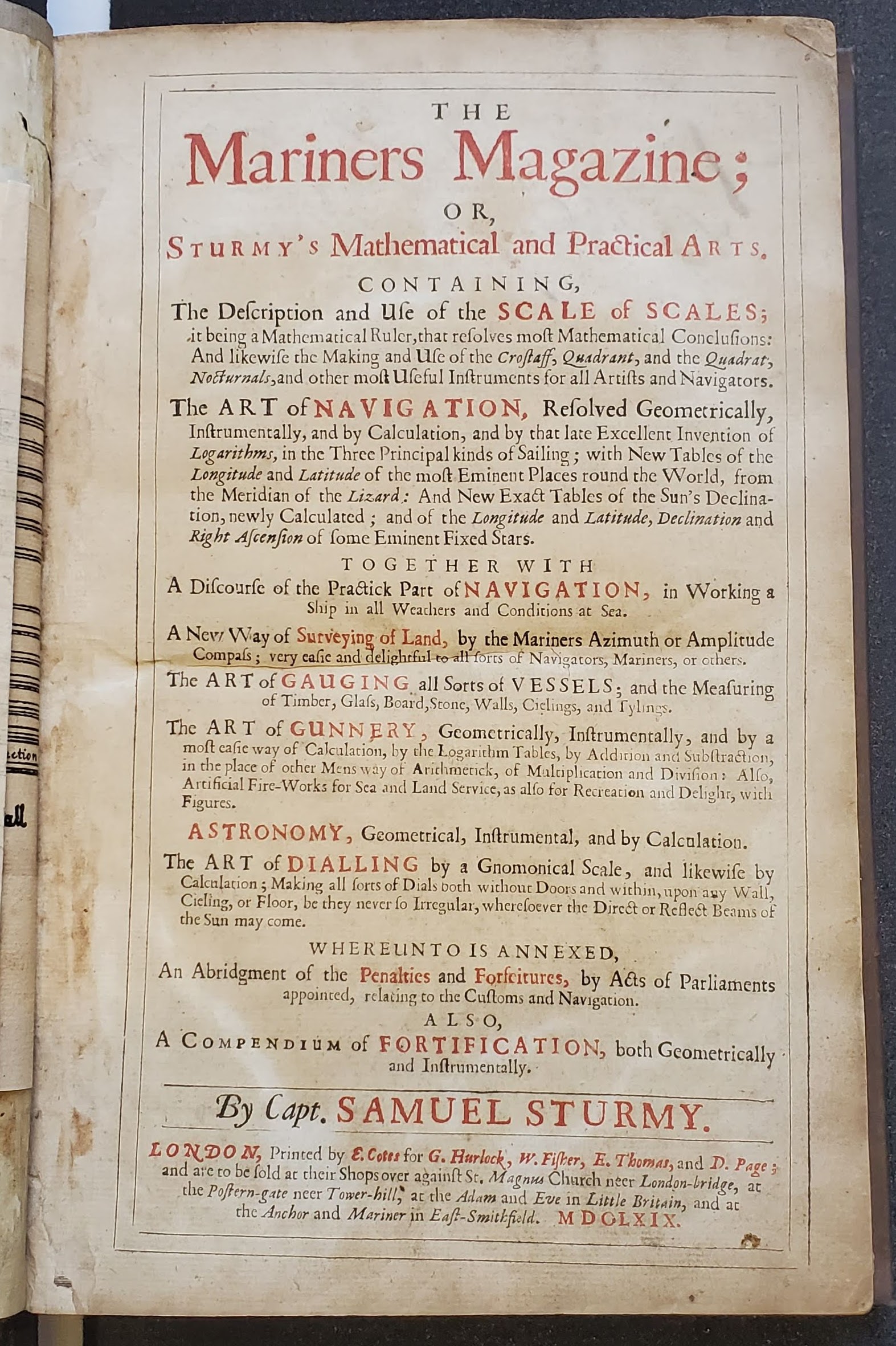 Perhaps the oldest book to appear on the blog so far, this book was printed in 1669. It was written by Samuel Sturmy, a British captain sailing from Bristol to Virginia and the West Indies. The sections of seamanship were written as a dialogue between the captain and crew, parts of which were used in Jonathan Swift's Gulliver's Travels. It went on to be such a great resource for sailors, pirates, and buccaneers that it was carried on ships. For example, it was used by Captain William Dampier, the first Englishman to reach Australia and the first man to circumnavigate the globe three times. This book was recommended for acquisition by Professor Margaret Schotte at York University. ASC makes decisions on acquisitions based on many factors but one of the most important is making sure the work will support York students and faculty in their research and teaching. When a faculty member recommends a book, it allows us to support the work of faculty and strengthen the relationship between the Libraries and the York community.

In addition to the importance of its contents, this book has a number of elements related to its physical construction that are worth noting. Firstly, it was printed by a woman. E. Cotes was in fact Ellen/Ellinor/Eleanor Cotes, who inherited a print shop from her husband Richard Cotes upon his death in 1652. While they may have been involved in the business while their husbands were alive, inheritance after a spouse's death was the most common way for women to become business owners. By 1666 Cotes had three presses, two apprentices, and nine pressmen. The 1679 edition of this work was also printed by a woman, Anne Godbid. As mentioned previously, looking at books from a production standpoint means we are considering the book as an object. It is also likely that printing this book was more intensive than printing most others. While some illustrations are in relief, meaning they could be printed at the same time as the text, other pages have printed plates and text on the same page. Plates typically appear on their own pages because they go through a separate printing process through a rolling press that forces the paper into the carved lines of an engraving. Having both a plate and text on the same page mean the pages had to be printed twice, once through the printing press and then through the rolling press (or vice versa). This also meant that sheets had to be precisely positioned so that the different elements aligned.

Another complication to the printing and assembly process were its moving parts.

It may be unusual to see "Toy and movable books" as a subject heading for this book but there are in fact moving pieces to this book. It contains three volvelles (from the Latin volere, meaning to turn) or wheel charts, considered the first movable objects to be put in books. Multiple layers of paper are anchored with a string, giving the reader the ability to turn the concentric circles. The earliest existing volvelle comes from the mid-thirteenth century and they were first used for practices like divination and fortune-telling. In the late fifteenth century volvelles began to be used for scientific purposes like the ones in this book; this jump is not surprising given the connection between astrology and astronomy at the time. Here, the volvelles are used to measure tides and compass variation (between p.6-7), plotting a position at night (between p.72-73), and computing the movements of the stars (between p.76-77). Volvelles meant users no longer had to memorize complicated calculations, but could instead rely on the book to do the computing for them. In the study of book history, volvelles are evidence of active engagement with the text, rather than just passive reading. It could be compared to the interactive elements we commonly see when we read online, meant to engage use beyond simply reading the text. 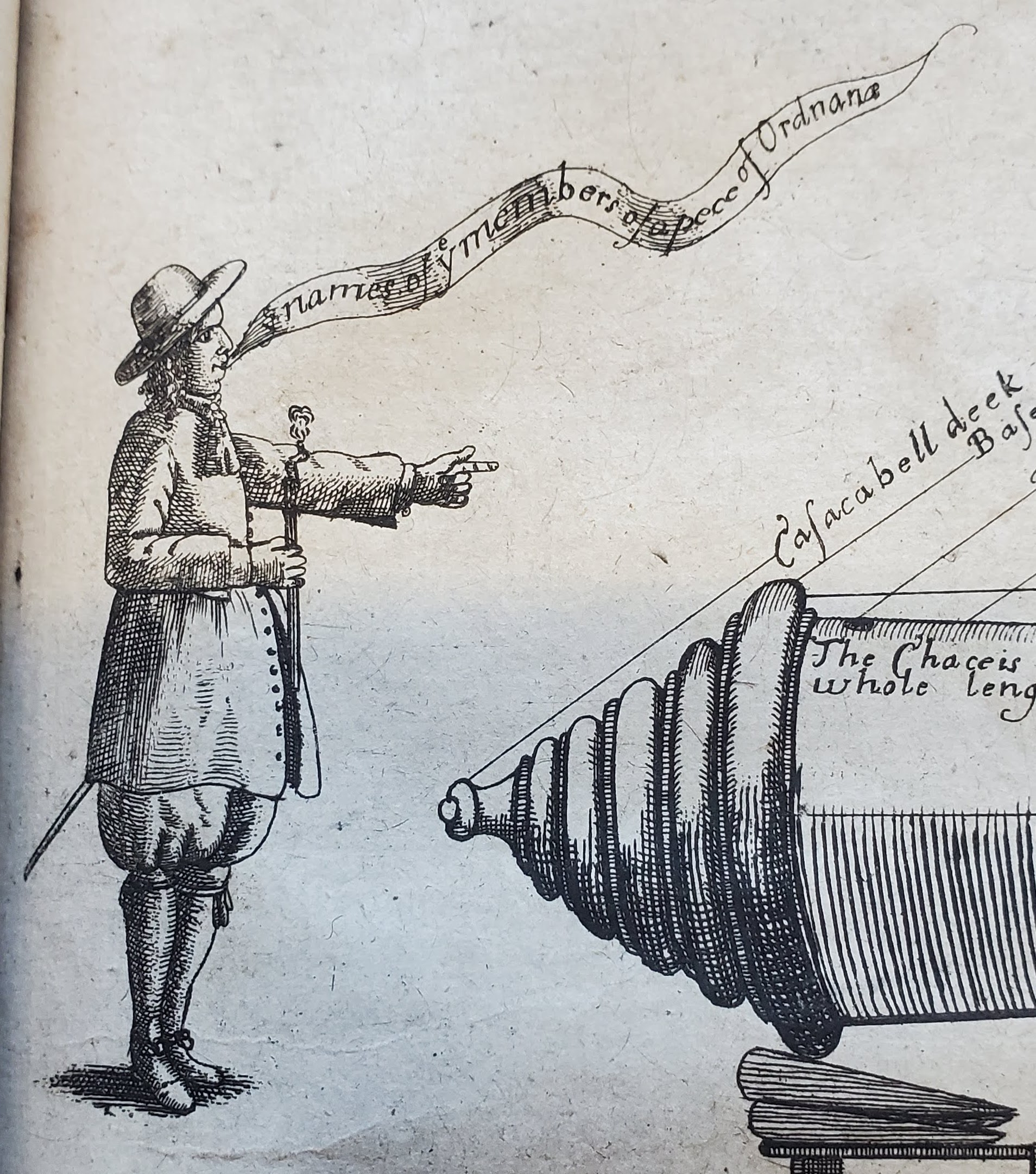 Finally, one of my personal favourite elements of this book's printing is on a page describing naval gunnery. In it a man points to the cannon and says "yͤ names of yͤ members of a pece of Ordnanae" pointing out that the image shows the individual pieces of an ordnance (artillery). To express this, the man's words are inside an early form of a speech bubble, called a speech scroll or banderole. Studying rare books allows us to see history up close. Textual and graphic elements that we are used to today evolved from hundreds of years of experimentation visible in the textual record, like the evolution from speech scrolls to speech bubbles seen in modern comics. 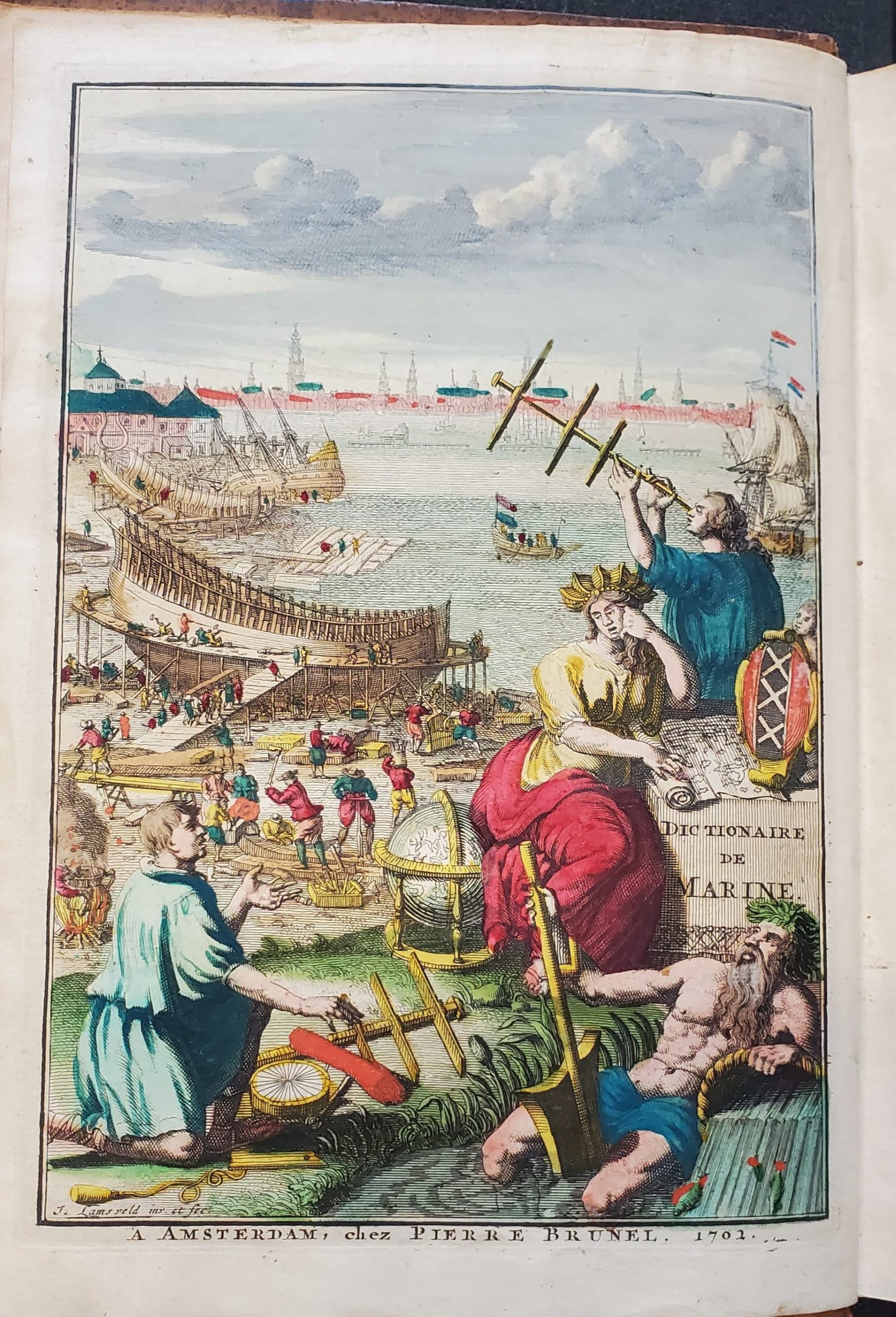 This French dictionary on naval terms is exhaustive in its terminology and its engravings illustrating those terms. Included in the work are several engravings as well as an engraved title page. Engraved title pages contain title information while being completely engraved and was typically in addition to a traditionally printed title page. In this case the engravings are also hand-coloured. The hand-colouring is extensive and high quality, even including shading with colour (in addition to the shading made by the engraving). I explained the process of engraving in our May blog post (click here to read), but each book allows us to showcase different elements of these processes. Dictionaire de Marine clearly shows one of the identification marks of intaglio prints, plate marks. When an engraving goes through a rolling press to push the paper into the incised lines full of ink, the paper gets pushed into the edge of the plate, leaving an impression on the edges of the image. Besides identifying the type of illustration (engraving, etching, etc.) plate marks are one of the most common forms of identification of plates, and therefore evidence of the type of production the book underwent. Sometimes the paper was cut so closely to the edge that a plate mark was removed, or the plate was simply so large the edge of the plate never met paper. That is to say plate marks are not always available to help identify production methods, but when present they are a visual clue as to how a book was printed. 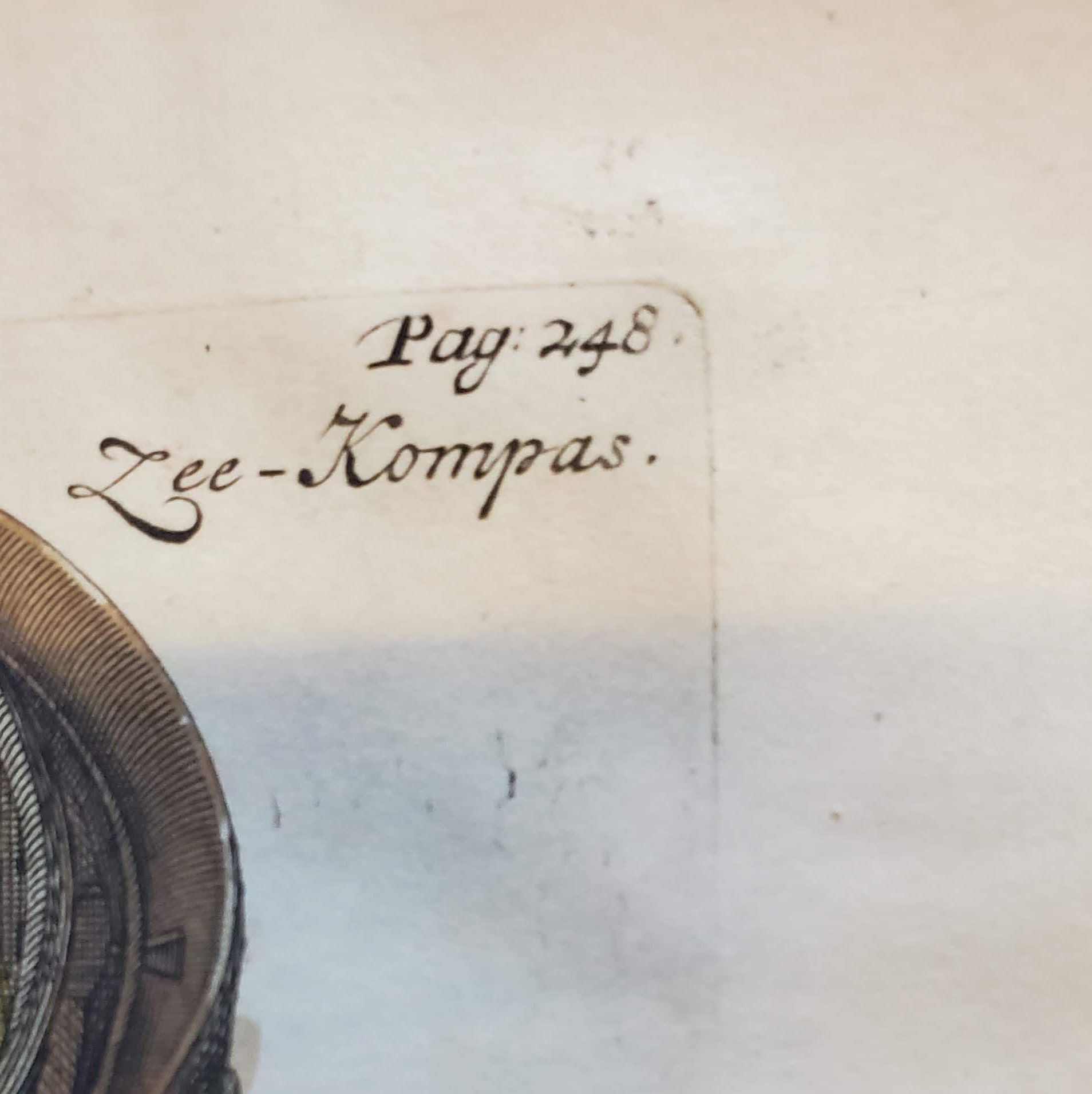 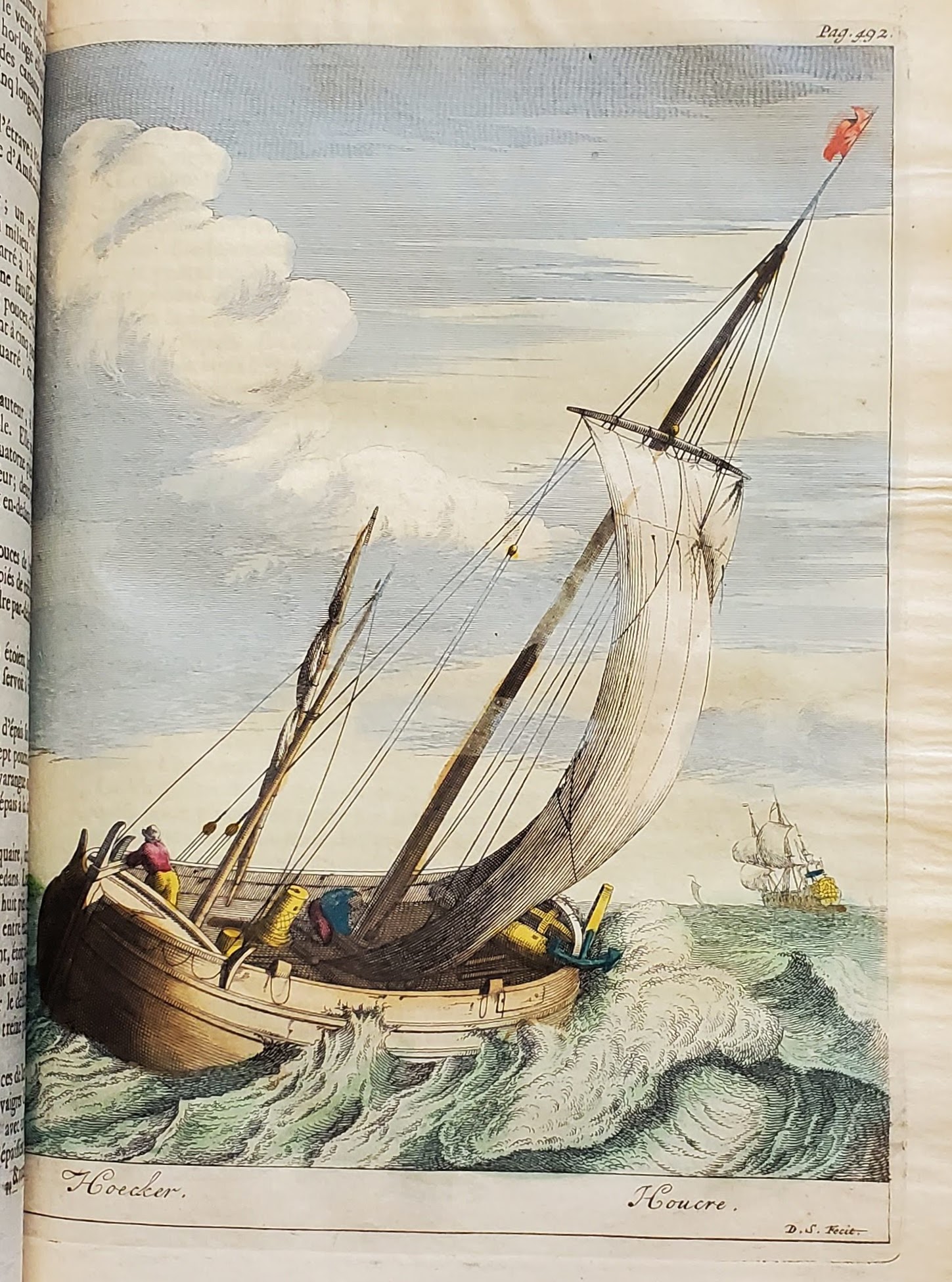