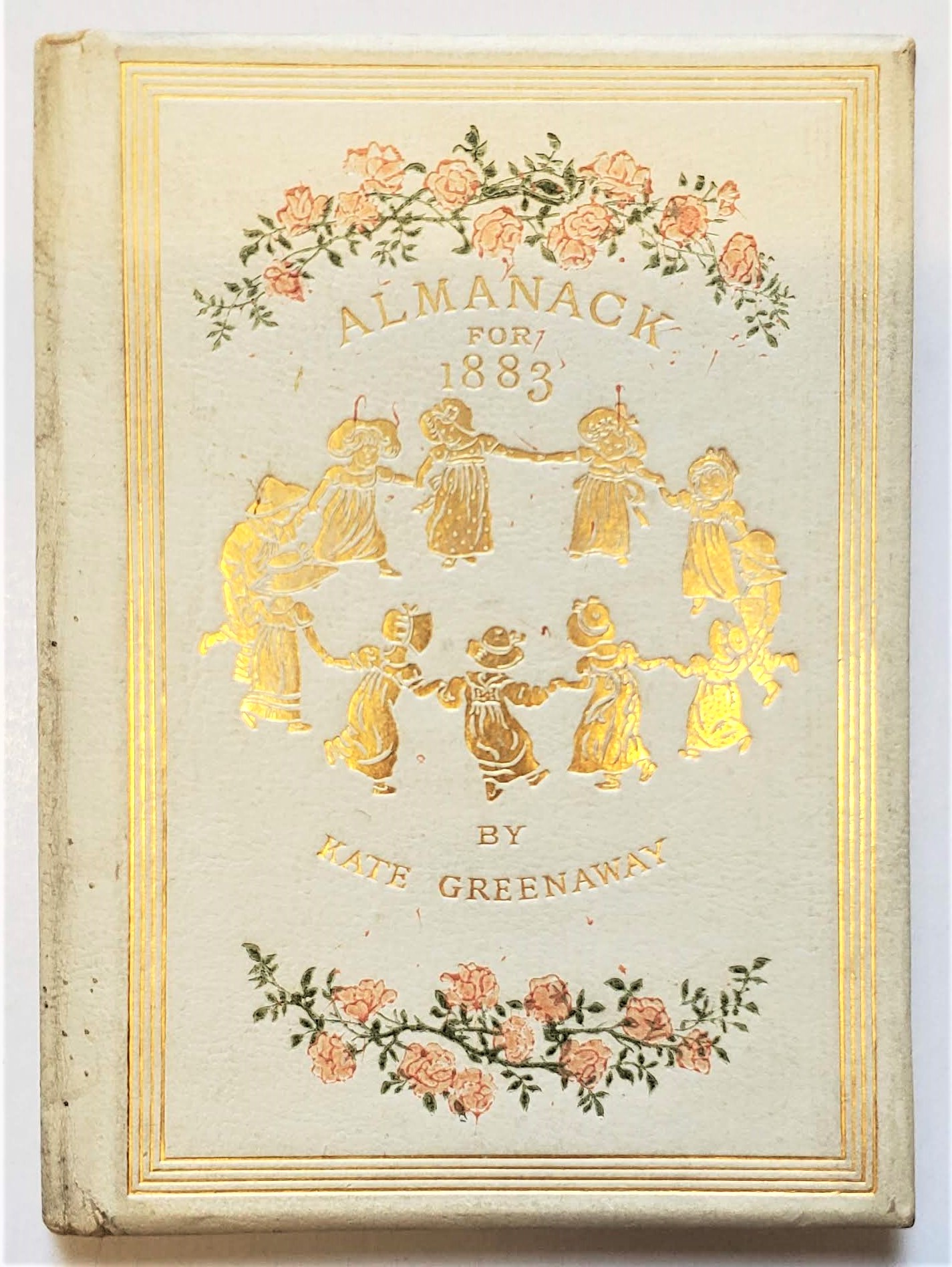 This almanac is the work of Kate Greenaway, an English artist part of the Aesthetic Movement which focused on the beauty of art and championed the idea of "art of art's sake." At this point in her career Greenaway was working with printer Edmund Evans, who had helped Greenaway make a publishing deal with George Routledge to write and illustrate her own works. Her early books Under the Window and Kate Greenaway's Birthday Book for Children (ASC copy: CLC 2764) were met with great acclaim and further publications proved Greenaway's name on a work (almost) always ensured its success. Evans had suggested an almanac for a shilling and it went on to sell 90 000 copies in England, the United States, France, and Germany. Great thought went into the format of Greenaway's books, they were small so they could fit into the hands of children. This almanac gives the days of the week for each month, portraits of the seasons, and rhymes written by Greenaway about remembering which months have 31 days. 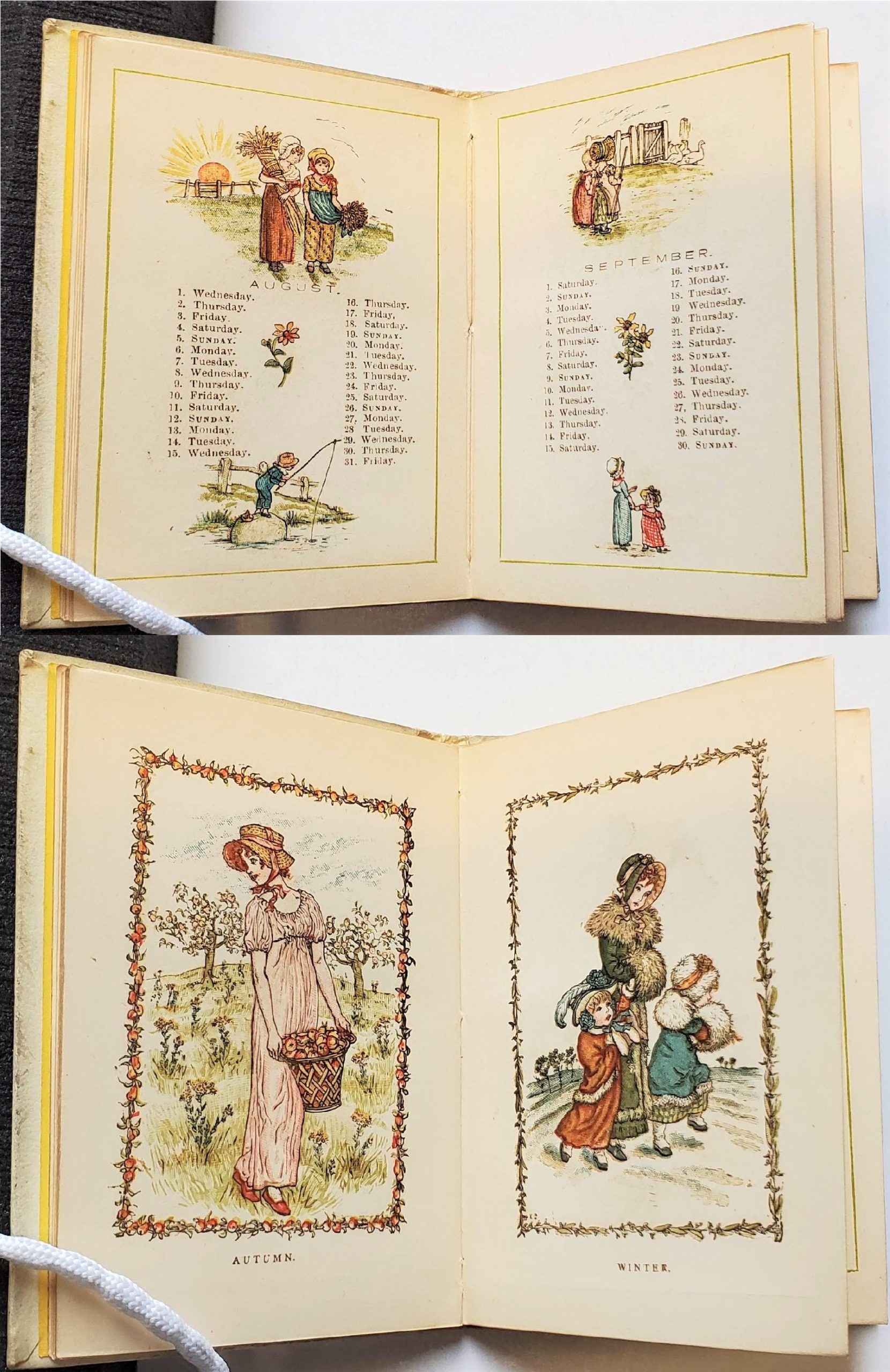 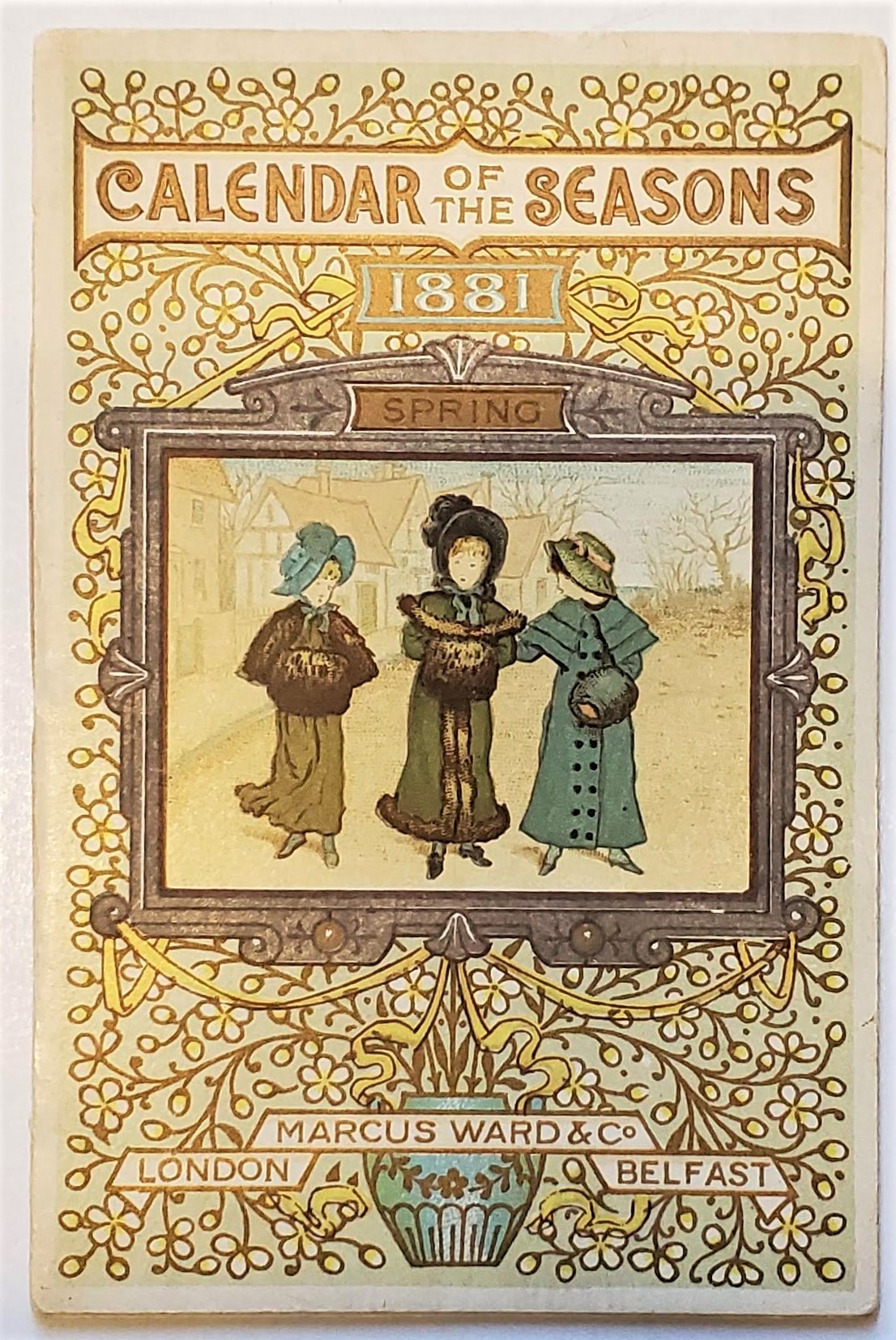 Unlike the almanac, this calendar does not have Greenaway's name and it was published by Marcus Ward & Co. The firm had hired Greenaway in 1868 to produce illustrations for a variety of cards and calendars. While the designs were recorded at Stationers' Hall, they were not in her name and only with Greenaway's later success was her monogram KG added to the cards. While the partnership is said to have ended in 1878, based off this calendar we can see that Marcus Ward & Co. continued to publish cards and calendars with Greenaway's works. In this calendar it is likely the images are earlier Greenaway illustrations as they do not have her monogram, but they can be identified based on the style and subject of the drawings. Greenaway often drew children in historical dress with plain backgrounds, flowers, and colour borders. This is true of this calendar in which the seasons are represented by girls in different dresses with borders of leaves and flowers, some of which are gilt.

Both of these acquisitions bolster ASC's existing collection of children's literature as well as our existing Kate Greenaway books, including another almanac from 1892. 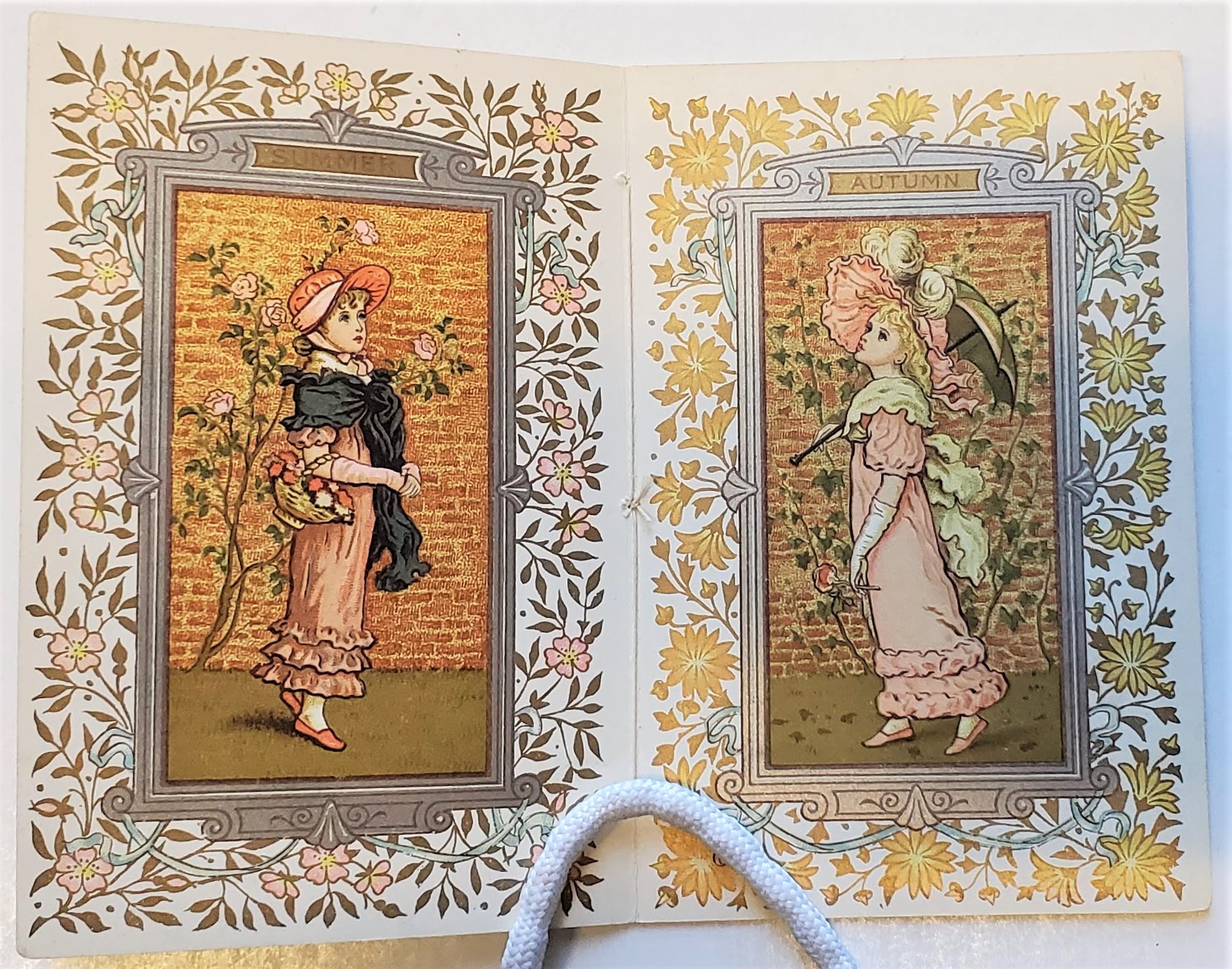 Ross, John. A Voyage of Discovery: Made Under the Order of the Admiralty, in His Majesty's Ships Isabella and Alexander, for the Purpose of Exploring Baffin's Bay, and Inquiring into the Probability of a North-West Passage. London: John Murray, Albermarle-Street, 1819. 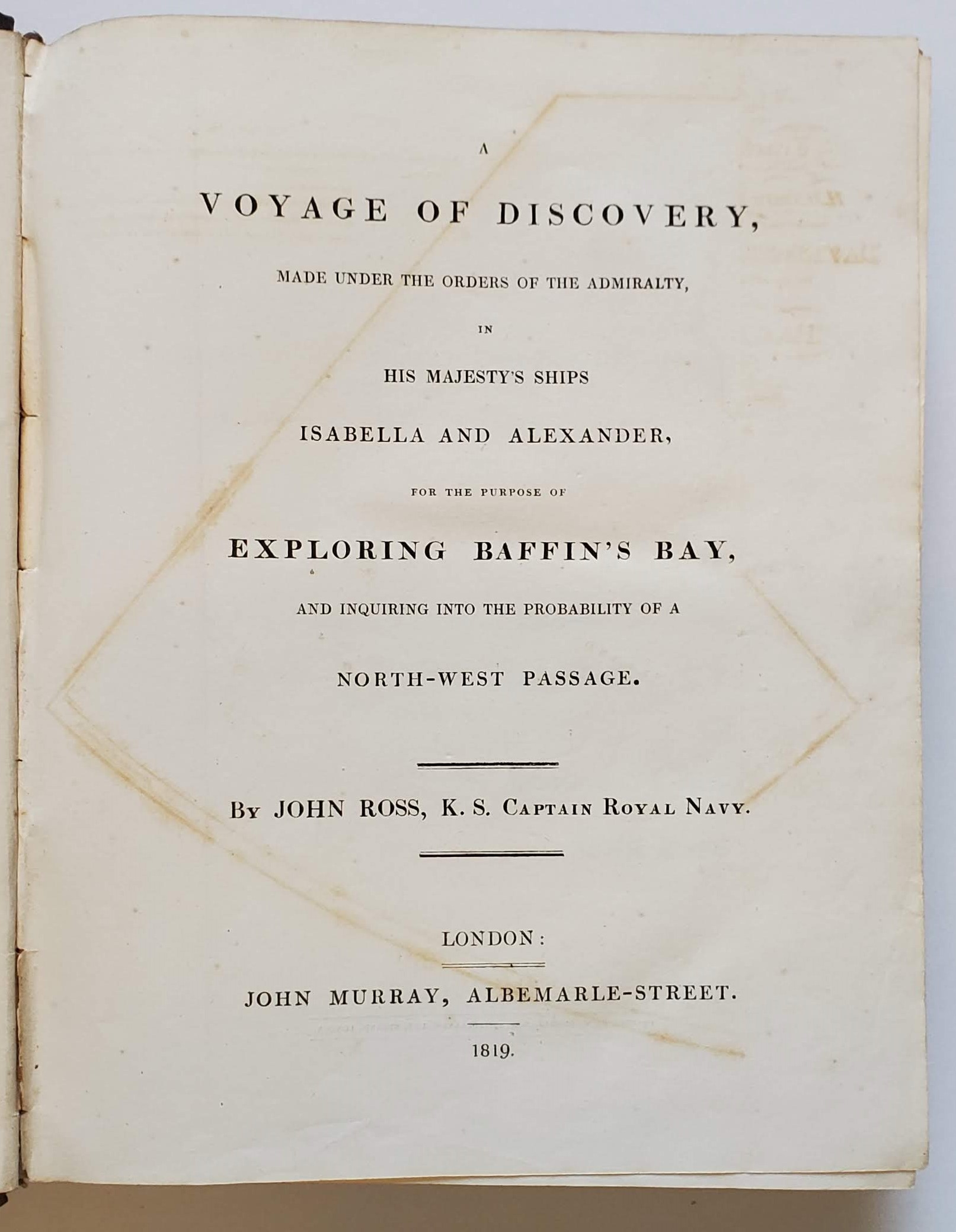 In April 1818 Ross commanded an expedition to investigate the possibility of a North-West Passage that would connect the Atlantic and Pacific oceans through the Arctic. Ross commanded the Isabella while his second in command William Edward Parry took the Alexander and by May of that year they had reached Greenland. The crew took the opportunity to take scientific readings, survey, and harvest whale meat before encountering the Inughuit of Northern Greenland. The ships then explored Baffin's Bay but Ross declared that there was a range of mountains that made the route impassable. He named them "Croker's Mountains." This declaration was controversial as Parry and other officers would later state that they saw no mountains there. Approximately a month later, as the weather became colder, Ross ended the expedition. After returning to England, Ross wrote his account of the journey, published in 1819, but the decision to end the expedition and the questionable existence of Croker's Mountains meant that Ross' reputation was greatly diminished. The situation was made worse when Parry was able to disprove the existence of Croker's Mountains by going beyond Ross' furthest point, passing through the impassable.

ASC has two copies of the book Ross published. Included in the account are 32 leaves of aquatint plates illustrating the events during the expedition. Aquatints are another form of intaglio printing most similar to etching. Rosin is applied to a metal plate and acid is then used to incise into the plate, the places left uncovered are bitten into by the acid, while the ground covered areas remain intact. The surface of the plate becomes pitted and holds ink between these dots. Different tones can be achieved depending on how long the plate is in the acid and/or by repeating the process multiple times. This process is often combined with etching for linework which cannot be achieved with just aquatint. The aquatint plates in Ross' Voyage of Discovery are also hand-coloured. As mentioned above, ASC has two copies of this book, which allows us to directly compare the plates and see the variation in their colouring. For example, this aquatint engraved by Daniel Havell shows the Crimson Cliffs seen during the voyage. The cliffs are red as a result of melting snow which exposes a large amount of algae. This algae is exposed to solar radiation and it blooms, producing red pigment called carotenoids to protect their chlorophyll. This phenomena is becoming more common as climate change snow and ice melt in the Arctic. 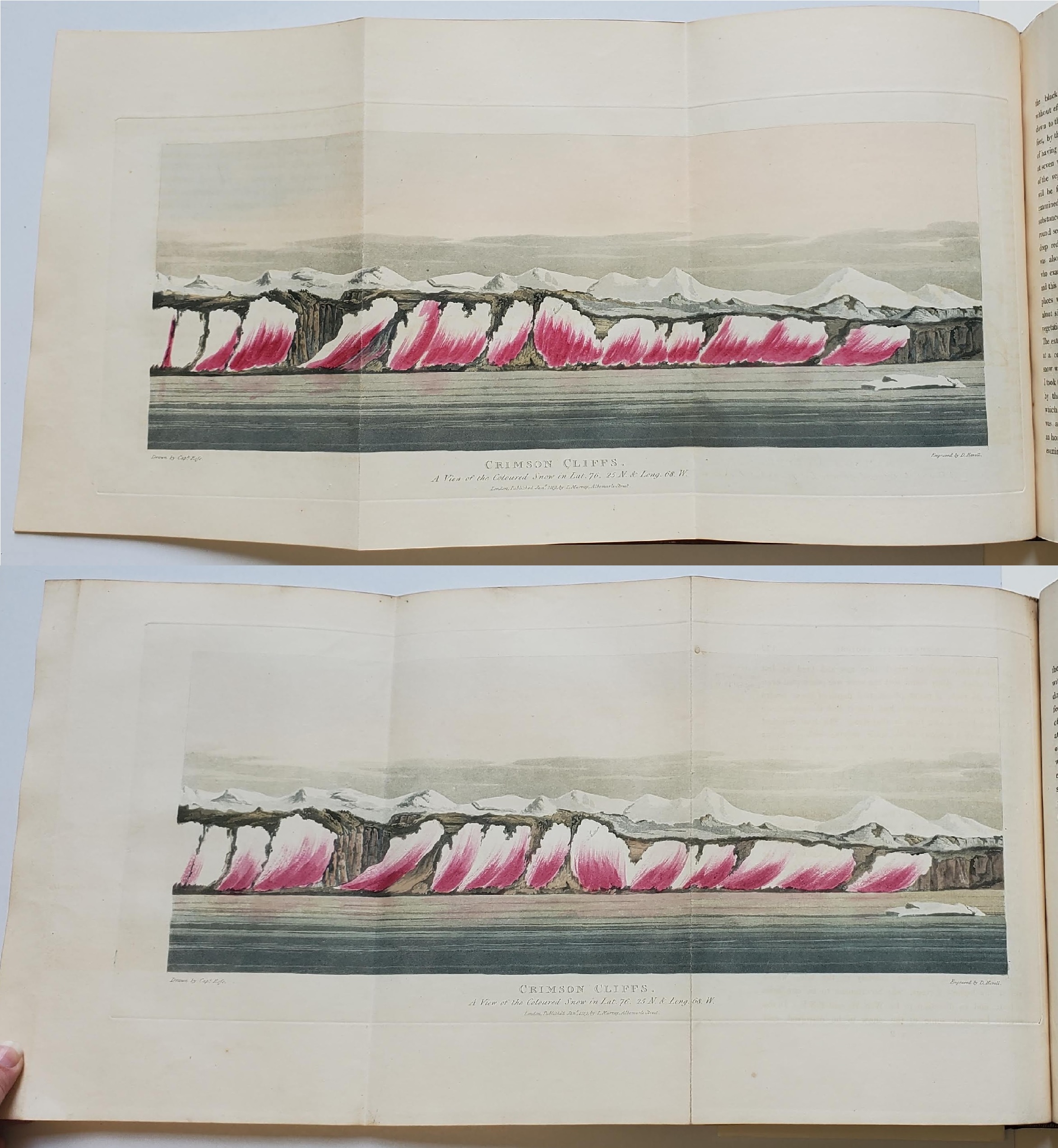 Home Canning: A Compilation of Recipes and Useful Hints on the Preserving and Canning of Fruits, Vegetables, Meat, and Soups. Montreal: Dominion Company Limited, 1926. 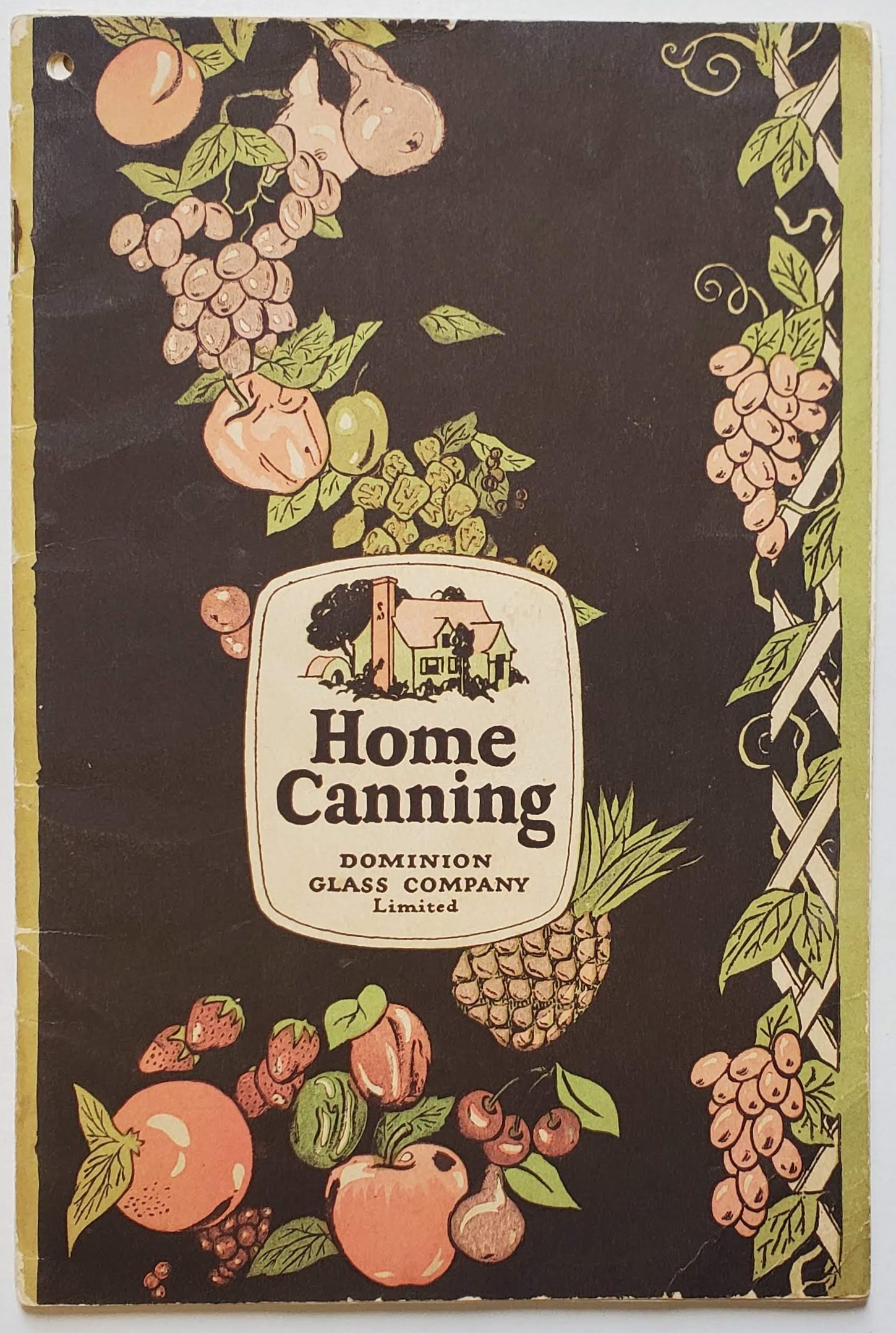 The earliest Dominion Glass Company was established in Montreal ca. 1886 and after a merger in 1913 with Diamond Flint Glass Co., Canadian Glass, and Sydenham Glass, Dominion Glass Company controlled eight plants across Canada. As they produced glass jars, it makes sense that they would produce a home canning booklet that highlighted their jars and how to use them for canning. Canning was marketed as economical, a way to can fruits and vegetables that would otherwise go to waste, even going so far as to suggest that you could sell your surplus to offset the expenses. Included are descriptions of different glass jars, general instructions for canning fruit and vegetables (and even meat!), and individual recipes.