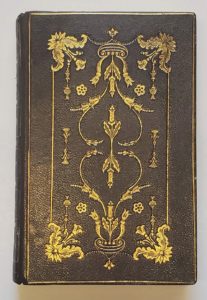 This book contains a series of essays about naturalists Hans Sloane, Pliny the Elder, Abraham Gottlob Werner, Peter Camper, John Hunter, and Maria Sibilla Merian. However, like so many of these posts our focus is on the outside of the book rather than the inside.

First, the black leather binding is decorated in gold in the Art-Nouveau style. This style is characterized by images of nature, especially floral motifs, and curved lines meant to evoke  the bends in nature, in its trees, rivers, and general rhythms. The decoration is simpler than other Art-Nouveau bindings which often have dense floral compositions. Instead, in a style that would later transform in Art Deco and Modernism, this binding combines straight lines with organic curved lines to create a symmetrical and refined design.

The second piece of the binding makes this book an exciting addition to York's Special Collections as it illustrates a unique form of book decoration, the fore-edge painting. These hidden works of art are typically painted on the fore-edge of a book (the long edge of exposed pages opposite the spine) though they can also be found on the top and bottom edge. Decoration of the fore-edge goes back to the Middle Ages when books were stored horizontally with the fore-edge facing outward. As a result, owners commonly used the fore-edge to mark the title of the work, making it easier for readers to find the book they were looking for. When books began to be stored upright the spine became the new place for the title and the fore-edge became a place for marks of ownership, ranging from names and monograms to coats of arms. The main distinction between these decorations and fore-edge painting is that these designs are created on the actual edge of a book and are meant to be visible when the book was closed. The earliest examples of actual fore-edge paintings in England date from the middle of the 17th century and are typically floral and heraldic, merging the previous designs and the new technique. It was not until the 1770s that landscape designs began to domination. 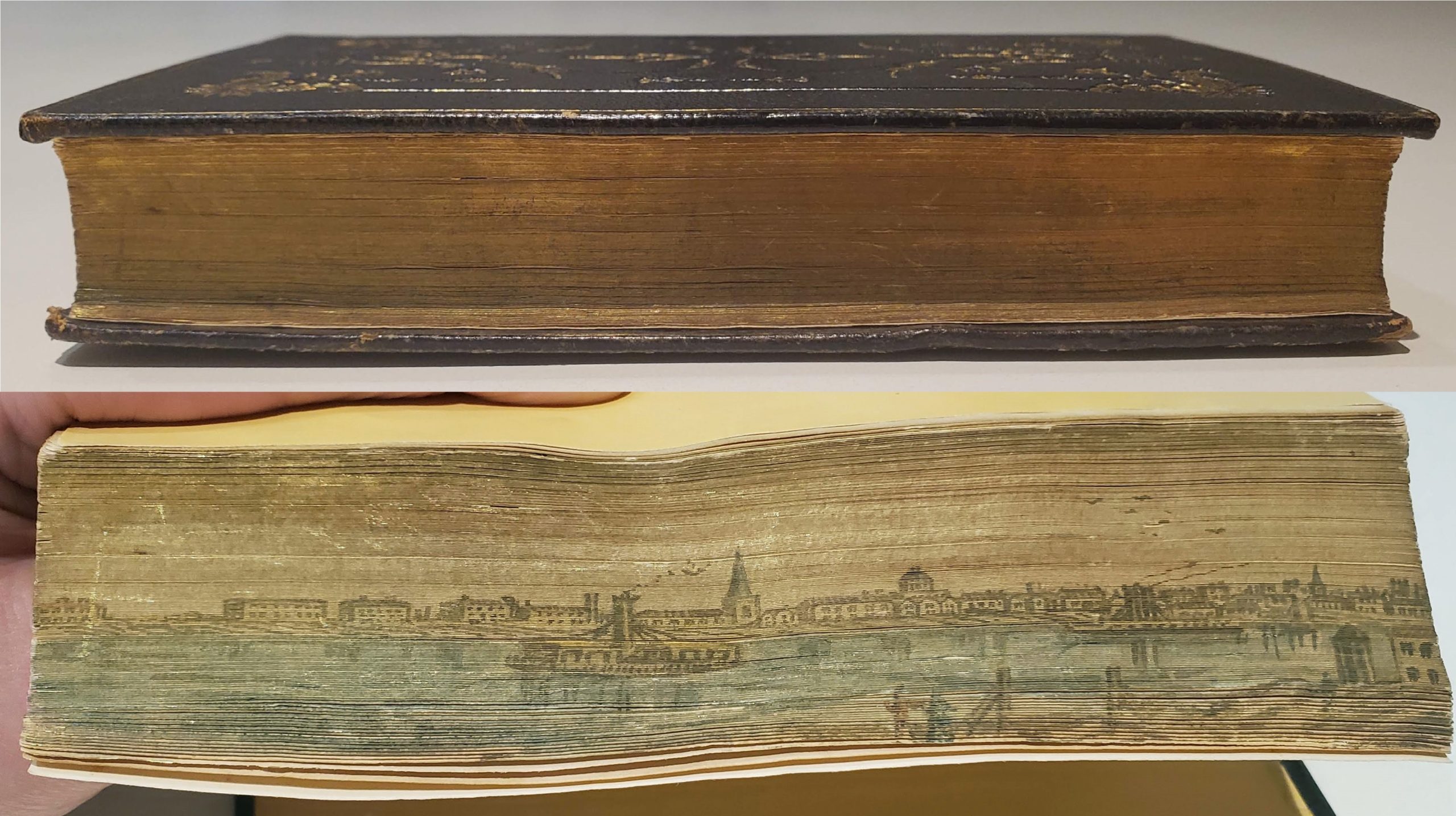 As mentioned previously, rather than painting on the edge of the book as the name suggests, the image is painted on the margin of each page. To do this, the paged of the book are fanned out at a 30-40-degree angle and held in place with a clamp. The artist is then able to paint their image on a thin edge of each page. Watercolour is the most common medium, though other mediums such as acrylic have also been used. Once the painting is complete the book is take out of the clamp and gold or another colour is added to the actual edge of the book (this can also be done prior to painting). The result is a painting that is hidden when the book's pages are not fanned. These paintings were typically done after the book was purchased, making each painting unique to its former owner, with it often having nothing to do with the text it contains. In this instance, the landscape has been possibly identified as the St. Boniface ferry landing in Winnipeg. Particularly, it bears a resemblance to an engraving drawn by George Munro Grant in Picturesque Canada. 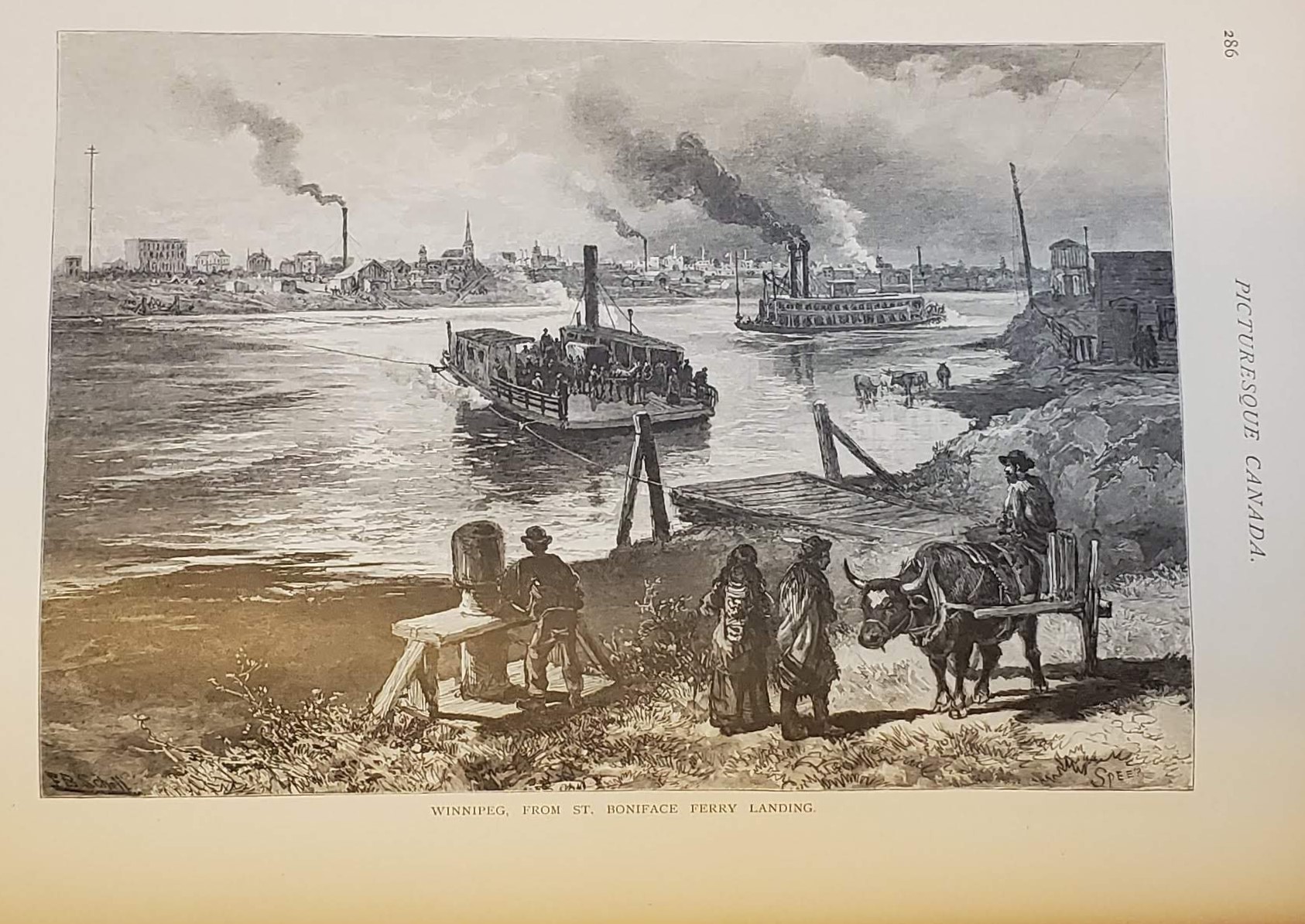 These details about the binding also reveal how cataloguers rely on book dealer's notes in their description. It was the bookseller who identified the binding as Art-Nouveau and the landscape painted on the fore-edge. Book dealers' notes play a vital role in special collections because they provide necessary context about a work that may make it suitable for purchase, and as in this case, the information they provide can enhance a catalogue record and therefore aid research.

When acquiring books for special collections, sometimes the book itself is not the primary reason for the purchase. In the case of this work, the accompanying material is what makes the book a unique acquisition. This Was the Kootenay is a history of the Kootenays region of British Columbia. In addition to the book is a variety of materials from W.J. Cox, a Canadian Pacific Railway (C.P.R.) employee who knew the author Clara Graham. Items relating to Cox's own history such as Cox family history notes, letters from C.P.R. executives, newspaper clippings on C.P.R. employees, a World War II photograph, and even two of Cox's childhood report cards. 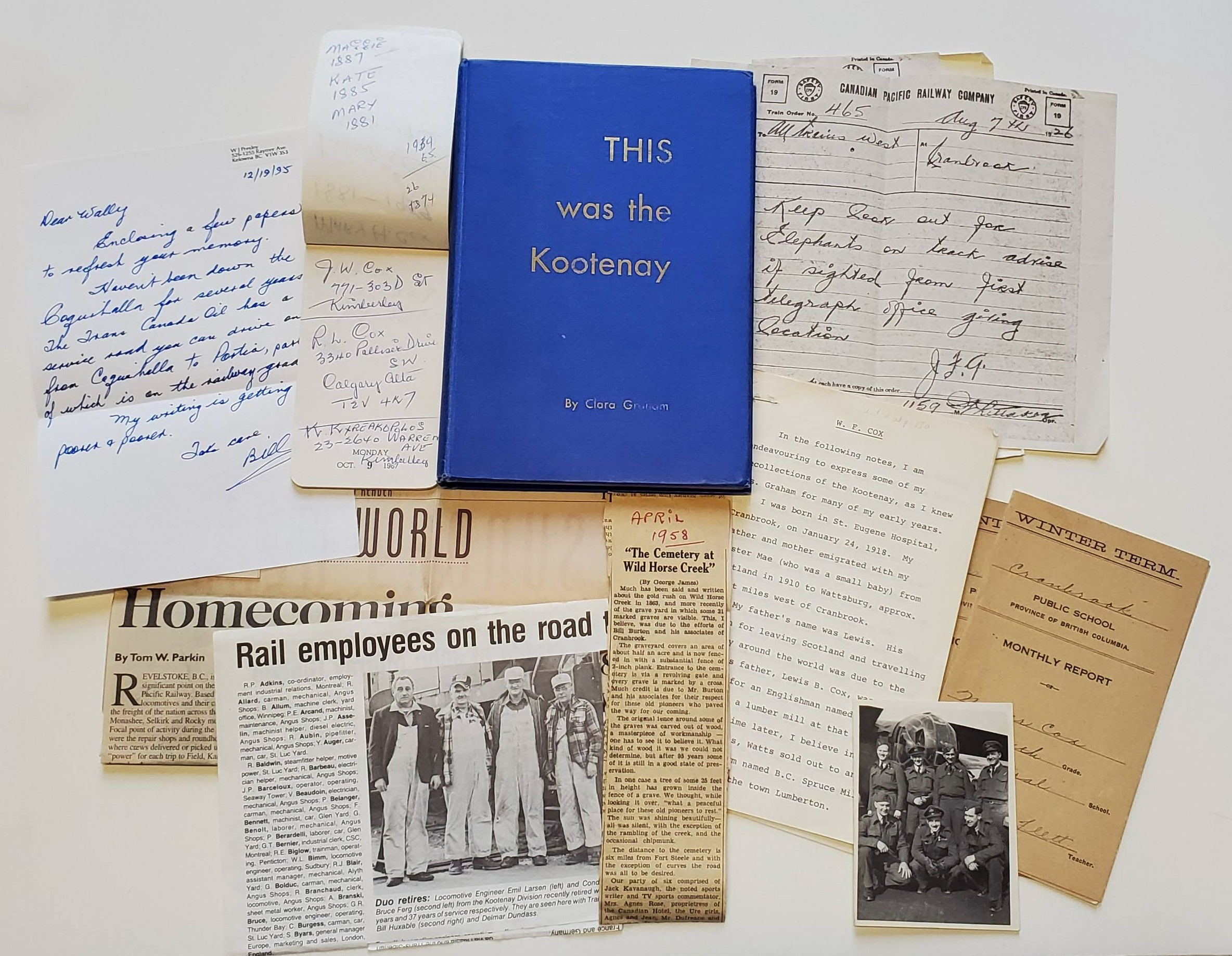 Most interesting bibliographically is the 13 page account Cox gives an account of his life along with his recollections of the author and the people mentioned in her work. It also includes the name of Graham's husband and memories of the local bars. This adds a different, local perspective to the people and places mentioned in the book as well as personal information about an author we otherwise know very little about. Most interesting personally, is Xerox copies of a C.P.R. order to watch out for elephants on the track.

In August 1926 the Sells-Floto circus came to British Columbia with 1000 performers and labourers and advertised camels, lions, a Wild West Show, trapeze artists, 50 clowns, and dancing elephants. It travelled the country by railroad, offloading in the morning to be ready that same afternoon. On the morning of August 6th, 1926, while the cars were being unloaded, elephants took off in different directions. It prompted a train order from C.P.R., "All trains west at Cranbrook. Keep look out for elephants on track. Advise if sighted from first telegraph office giving location." Despite the loose elephants, Sells-Floto circus departed from Cranbrook on August 7th to go onto Washington and Vancouver. The reported number of escaped elephants ranged from five to fourteen, and most were quickly rounded up and sent on to the circus, but three evaded capture the longest: Tillie, Myrtle, and Charlie Ed. Tillie was captured with the aid of trackers from the Ktunaxa nation a few days after her escape. Myrtle was the next to be found a month after her initial flight, but unfortunately she either succumbed to pneumonia or was euthanized due to her poor condition. Finally, Charlie Ed, who became affectionately called Cranbrook Ed, was apprehended after an amazing 39 fays in the B.C. wilderness, again with the assistance of members of the Ktunaxa nation. With that, the "Great Cranbrook Elephant Hunt" came to an end. 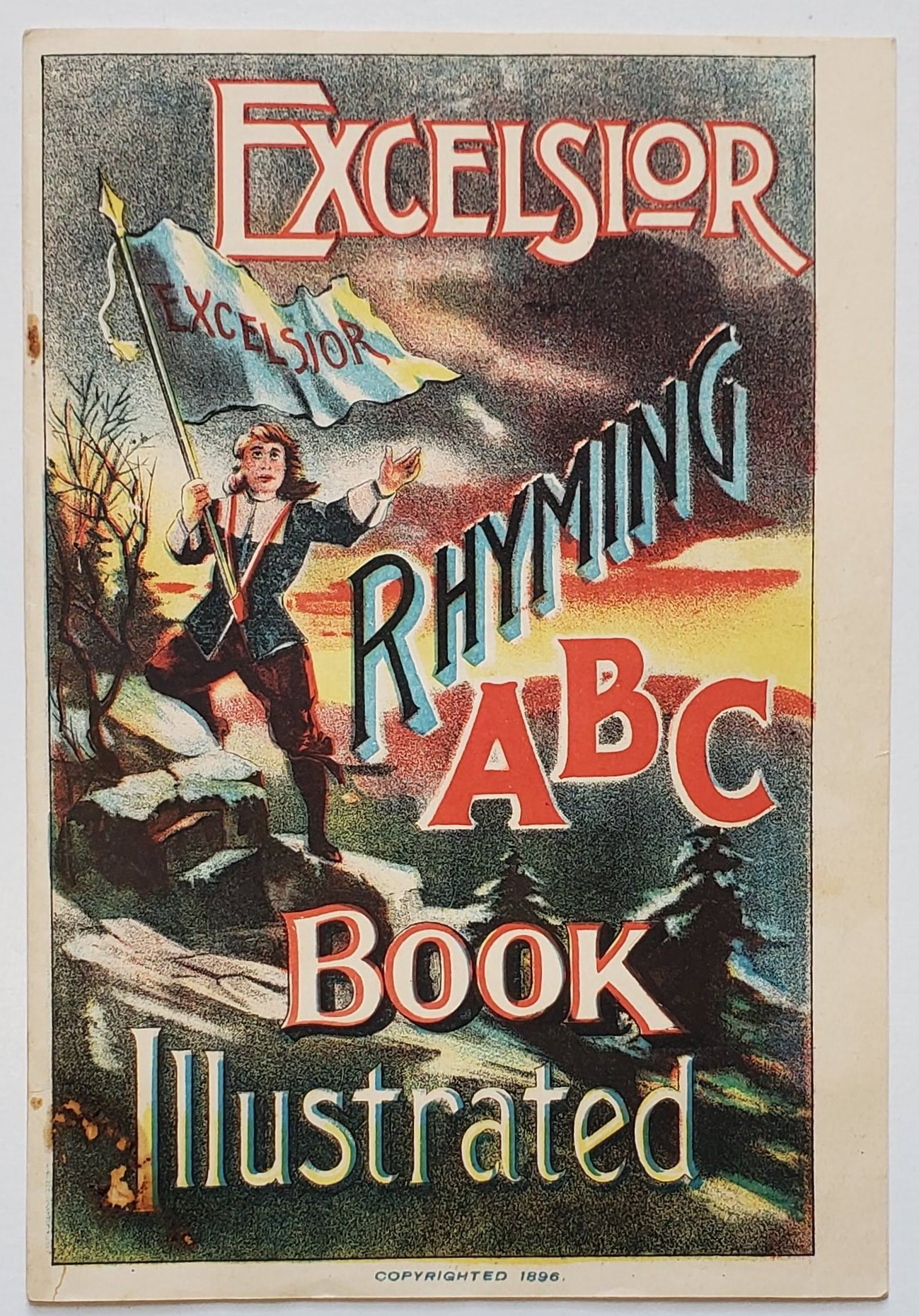 This colourful alphabet book was issued by Diamond Dyes, one part of Wells, Richardson, & Co., a company based out of Burlington, Vermont. The company was prolific in releasing promotional material. In addition to the advertisements in other bools, items such as almanacs (CPC 1886 0070) and a variety of booklets were produced to exclusively advertise Diamond Dyes. These include, "A Modern Cinderella," "American Bird Pictures in Colored Crayons" (an early paint by numbers), and "How to Dress Well at Small Expense" and eventually the Diamond Dye Annuals. Some of these contained outright advertisements for the dye company, others had the ads integrated into their content, as is the case with this booklet. 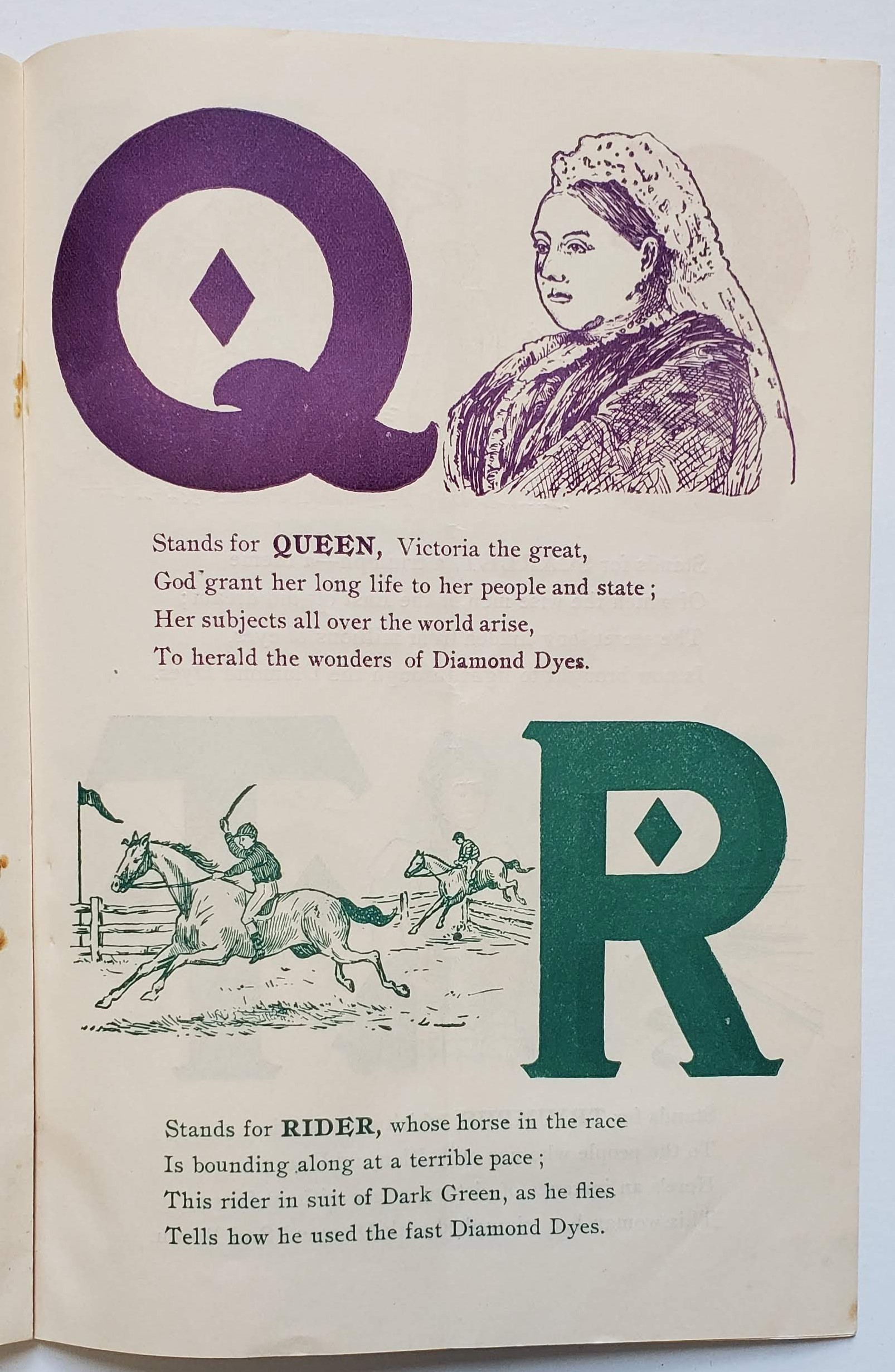 This particular example aims to teach the children the letters of the alphabet while espousing the quality of Diamond Dyes. Personally, I see a connection between this work and the sponsored content on the internet. While the content often has nothing to do with the advertiser (or is tangentially related), sponsored content aims to promote a product through videos or social media posts meant to have broad appeal. Similarly, an alphabet book has broad appeal, and served as a vehicle for Diamond Dyes to advertise their product.

The first edition of this book, commonly abbreviated as Phytobasanos, was printed in Naples in 1592 with some of the first pictures of plants printed using engraved plates as opposed to the more common woodcut. The author, Fabio Colonna became interested in botany because he was searching for something to alleviate the symptoms of his epilepsy. He later went on to join the Accademia dei Lincei, one of the oldest scientific institutions in Europe, whose history is discussed in this later edition. 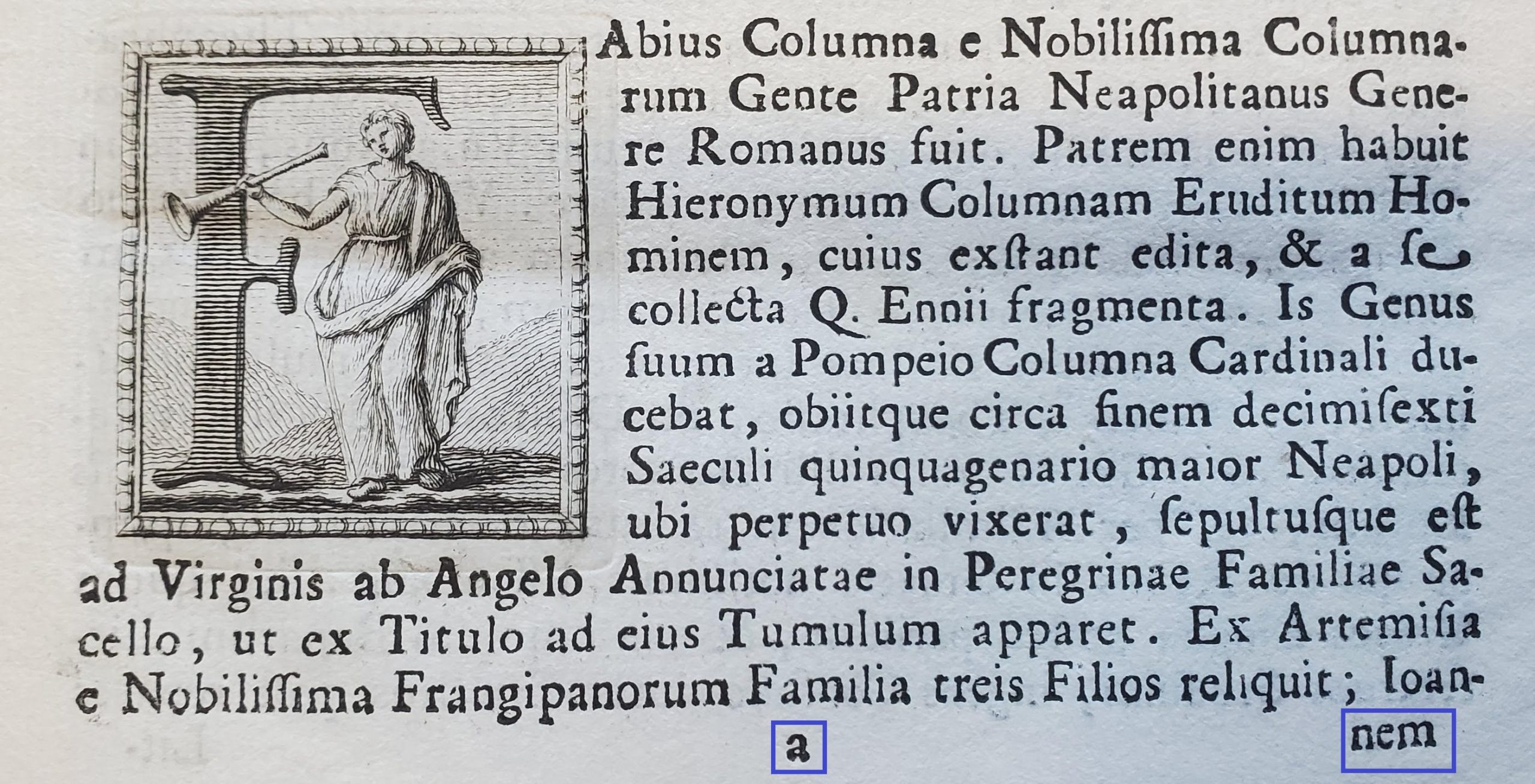 This second edition was printed in Florence in 1744 and is situated in the hand press period of book production. This means that it was produced on a printing press operated by hand. Since most of its production was done by hand, there are often elements that may be unfamiliar to the modern reader. Multiple pages were printed on a sheet, folded into quires/gatherings and then arranged in the correct order. We can still see the evidence of this construction on the pages. One of the ways to make sure the sheet was folded the right way, was a catchword in the bottom right corner of each page, in this example "nem." This word (or in this case part of a word) was the first to appear on the next page when the pages were folded correctly. Once the pages were folded it was time to assemble. 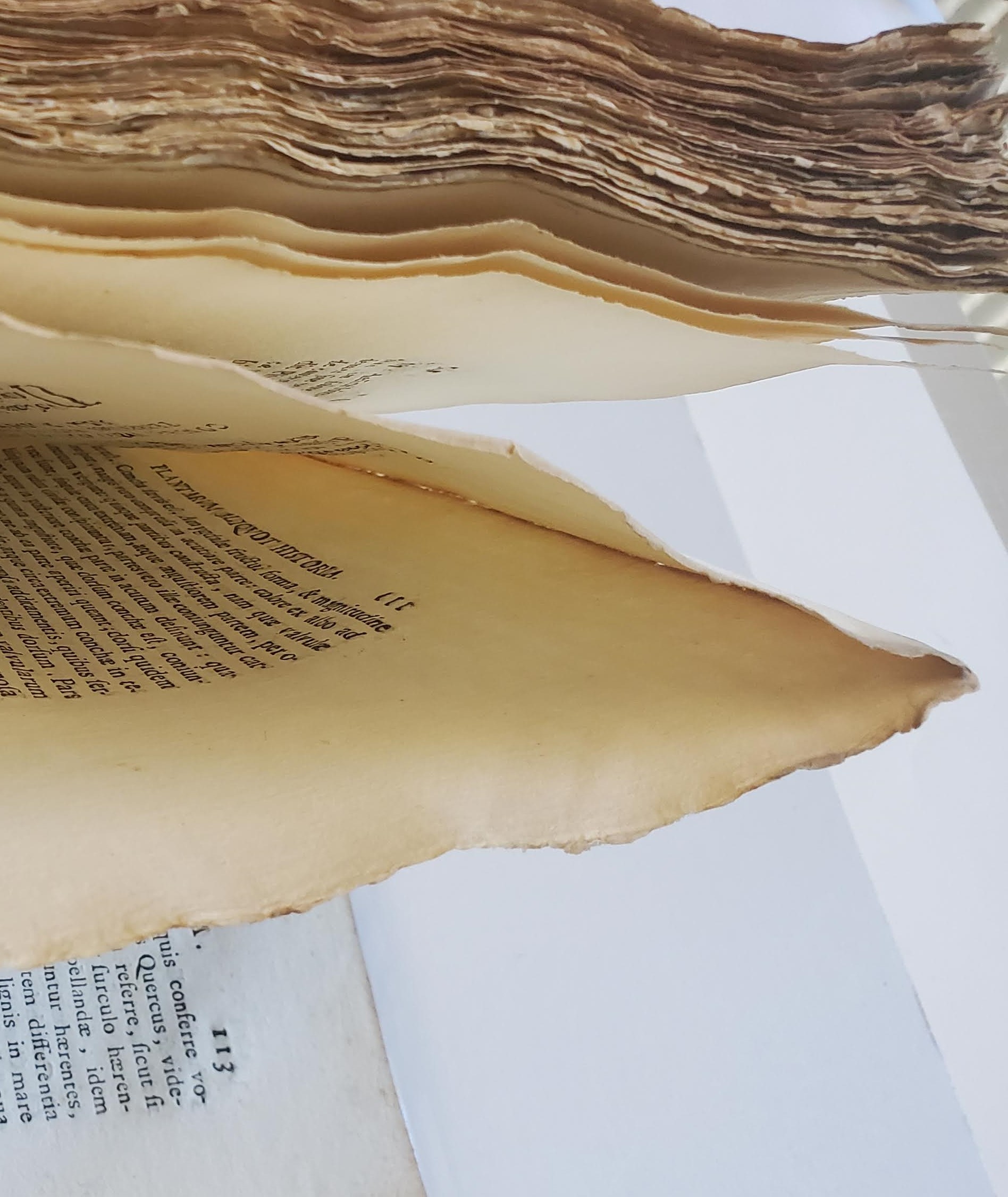 The letter in the bottom centre is what is known as a signature (the gathering itself can also be called a signature), which helped the binder put the gatherings in the correct order. Symbols, and lower and upper case letters were used and the book could sometimes cycle through the alphabet multiple times, with each additional cycle doubling or tripling the signature (Aa, Aaa, etc.). The alphabet at the time consisted of 23 letters, I/J and U/V were considered the same letter and W was omitted altogether. Once assembly was complete the gatherings would be sewn together and a temporary binding was put on. It was then up to the purchaser to have their books bound. During this binding process the rough edges of the paper were typically cut and once the owner had their book at home they would open the folded edges with a paper-knife. However, when this book was bound the outer edges were not trimmed and some of the edges folded during construction remained unopened. These unopened and untrimmed edges, seen here in Phytobasanos, show us that the binder did not trim the pages before casing it in a permanent binding, and the unopened pages suggest that the book was never fully read by it previous owner. We do not open these edges at the library, as it provides us a with a valuable teaching example for the steps involved in making and reading a book in the hand press era.