This tool was sold by stereograph companies to give their product a three-dimensional effect.  It was acquired as part of a collection of over a hundred stereograph images taken of public celebrations of the  300th anniversary of the establishment of European settlement at Quebec, which took place from July 19th to the 31st in 1908.

Over a hundred years later, companies continue to develop technologies that will give viewers the 3-D experience of static images.

This object was donated as part of :

In 1908 Quebec celebrated the 300th anniversary of the establishment of the first permanent European settlement at Quebec in 1608 by Samuel de Champlain.  Between July 19-31,  1908 various celebrations were held, including a military parade, historical procession, numerous historical pageants, and a pontifical mass. Celebrations were concluded with a ‘fireworks and electrical display’ which employed the use of searchlights.

Stereographs (also known as stereoviews, stereocards and stereograms) provide two slightly different images side-by-side which create a three-dimensional image when viewed through a stereoscope or by the viewer crossing their eyes. Stereographs became popular with the British public after Queen Victoria and Prince Albert were presented with one during the Royal Exhibition at the Crystal Palace.

In North America, the two largest publishers of stereographs were the firms Underwood & Underwood and the Keystone View Company, both of which published boxed sets of the Tercentenary celebrations in Quebec.

The creation of such collections documenting historical events was part of what Steven Hoelscher identifies as the Victorian ‘search for order’ amidst radical social and economic unrest. These photographic views are artifacts of concerted efforts to exert control over landscapes towards the creation of a new middle-class postfrontier space.

The largest collection of stereographs is held at the University of California Riverside, which also holds the business archives of the Keystone View Company, which created the Tercentenary series of images.  The Keystone View Company operated from 1892 to 1963 and was based in Meadville, Pennsylvania. A database of over 24,000 digitized images from the collection can be searched at http://www.cmp.ucr.edu/. 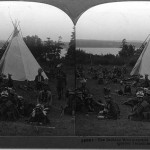 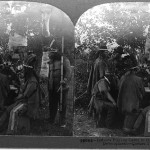 Check back next Friday for the identity of Object #2!

Comment on “What Am I? Exhibit update: The identity of Object #1 revealed!”