Though CTASC was closed for many months over the last two years of the pandemic, we didn’t stop acquiring new additions for Special Collections, and, in December 2021, we were thrilled to welcome our new Special Collections Cataloguing Assistant Taylor Tryburski (she/her) to the department to help us manage these holdings and more.

Taylor comes to us from the University of Toronto’s Centre for the Renaissance and Reformation Studies, where she worked first as a Rare Book and Digitization Assistant and then as their Library Technician. She has a Master of Information degree (University of Toronto), where she took the collaborative program in Book History and Print Culture, and an Honours Bachelor of Arts, Classical & Medieval Studies (Wilfrid Laurier University). Unsurprisingly, Taylor’s research interests lie in the areas of medievalism, medieval and early modern rare books, and the book as an object.

In today’s blog post, Taylor will discuss some of the items she has catalogued since joining CTASC. We hope to make this a regular feature of the blog as Taylor makes her way through our backlog of Special Collections treasures.

Welcome to what I hope is an eclectic mix of acquisitions to our collection. While I have only been working at CTASC for a few months it has proved to be extremely rewarding. The goal of these posts is to showcase the types of materials CTASC collects and share (just as I have learned) how each item has its own story to tell. 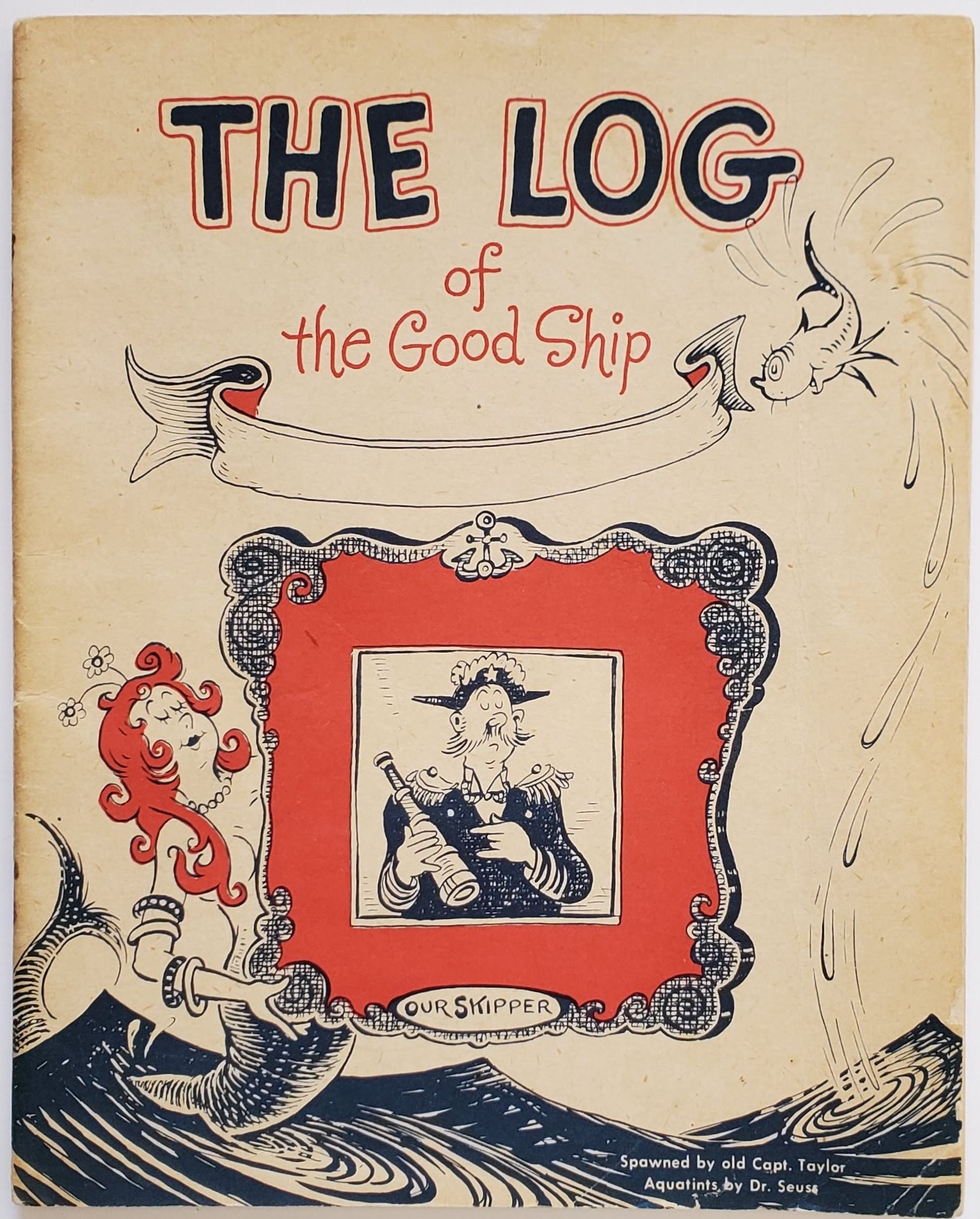 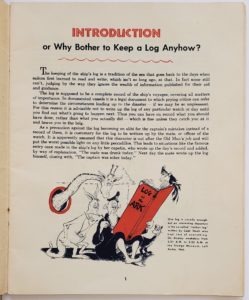 Before Dr. Seuss became "Dr. Seuss," Theodore Geisel worked in advertising, including with Standard Oil and its subsidiary Essomarine. At the 1936 Motor Boat Show, Essomarine launched "the Seuss Navy," and passed out diplomas to visitors, as well as caps, ash trays, and glasses. As part of this campaign three 30 page booklets were created, The Log of the Good Ship being the third and last. It dispensed tongue-in-cheek boating advice for novice boaters. While Giesel left Standard Oil in 1943, the campaign continued until 1948. - Waterway Guide.

"The keeping of the ship's log is a tradition of the sea that goes back to the days when sailors first learned to read and write; which isn't so long ago, at that."

A brochure featuring the Flanders 20 Runabout with a writeup of the vehicle and its specifications, along with information about the E-M-F Company. 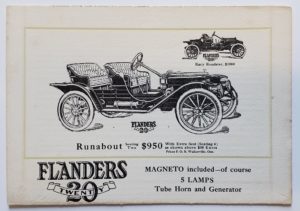 "The E-M-F Company was an early American automobile manufacturer that produced automobiles from 1909 to 1912...Late in 1909, E-M-F established a Walkerville, Ontario branch plant to produce the E-M-F 30 and Flanders 20...Shortly afterward E-M-F was bought out by Studebaker, which formed Studebaker Canada and rebadged E-M-F's products: the E-M-F as the Studebaker 20 and the Flanders as the Studebaker 20." - Wikipedia 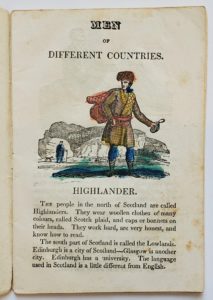 An American children's chapbook from 1838 which describes people from all over the world, along with some animals. Each description is accompanied by a woodcut created by Alexander Anderson. The woodcuts in this copy have been hand-coloured.

Chapbooks were meant to be cheap, often anonymous publications for those who could not afford books. Due to their price and size they often rarely survive. They were important for disseminating popular culture, with millions sold all over Europe until the mid-19th century when they began to face competition from cheap newspapers. - Wikipedia

The Bible in Miniature; or, A Concise History of Both Testaments. A new edition, enlarged and improved. Edinburgh: [publisher not identified], 1826. 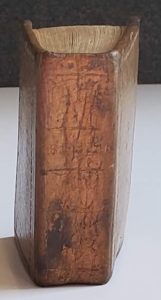 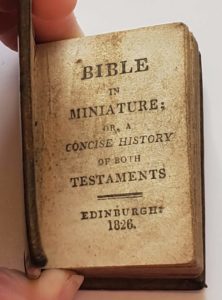 This miniature book measuring only 44 mm is commonly called a Thumb Bible. These books were usually paraphrased and abridged Bibles mostly intended for children. While they were first made in the early 17th century, the term 'Thumb Bible' was coined by Longman and Co. of London in the mid-19th century. - Wikipedia

This edition is "A new edition, enlarged and improved," however no record exists for a first edition.

A pop-up advertisement for Wrigley's gum created by Wally Hunt and Graphics International. They were attached to national magazines and created without any glue, only using fold-overs and slotted tabs. - Kyle Olmon via The Pop-up Studio NYC

This pop-up is part of a series created for the "Wrigley Zoo" campaign that also featured tv spots and vinyl records, this pop-up features information on the Asiatic Elephant. In total there were 14 animals showcased in these pop-up ads: Seal, Beaver, Elephant, Monkey, Camel, Kangaroo, Bear, Giraffe, Fox, Hippo, Lion, Raccoon, Sloth, and Rhino. 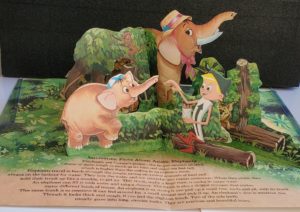 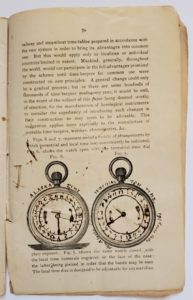 As a result of railway development and increased trade meant there needed to be a standardization of time. Sir Sandford Fleming proposed worldwide Standard Time at a meeting of the Royal Canadian Institute in 1879, and in 1883 all United States and Canadian railroads adjusted their clocks. -sandfordfleming.ca

This article outlines Fleming's arguments for non-local time with multiple clock faces to serve as examples. Owners' notes have been made throughout along with clock faces pinned over those appearing in the article.

An early 20th century viewbook of Ontario and the Muskoka region. Most notably, viewbook contains several interior and exterior shots of the Royal Muskoka Hotel.

Built in 1902, the Royal Muskoka Hotel could accommodate 350 guests on its 130 acre grounds and included many modern luxuries including electric light, hot and cold running water, a post office, telegraph office, bar, billiard room, bakeshop, newsstand, barber shop, and beauty salon. Sadly, after years of struggling during the Great Depression and an expensive overhaul in 1946, the Royal Muskoka Hotel burned down in the middle of the night in spring 1952. -muskokaregion.com 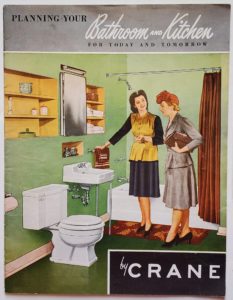 Printed just after World War II, the introduction in part reads, "Although it may be some time yet before the production and flow of materials approaches normal, it is not too soon to start making your over-all plans for building and remodeling your home." This catalogue provides layouts and design options for the bathroom and kitchen, along with plenty of options for Crane Limited items for sale.

This small pocketbook contained everything a 19th century gentleman would need to conduct himself. Included are chapters on dress, salutations, introductions, visiting, letter writing, as well as tips on how a gentleman should behave in conversation. A previous owner has also underlined some text and made drawings. 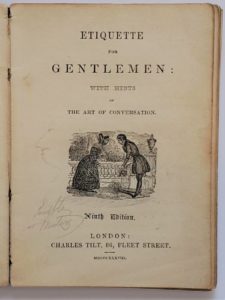 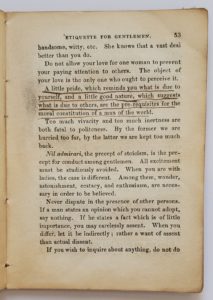 "First impressions are apt to be permanent; it is therefore of importance that they should be favourable." 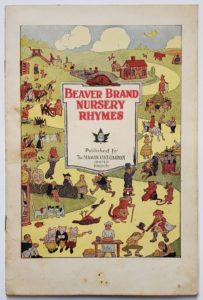 A booklet of 17 traditional nursery rhymes such as Old Mother Hubbard, Peter Peter Pumpkin Eater, Little Bo Beep, and Rain Rain Go Away repurposed to advertise Beaver Flooring. The text also argues that hardwood floors should be installed "for the sake of the children." Each rhyme is accompanied by a matching illustration and a short ad for the product. For example, the Old Mother Hubbard verse reads: 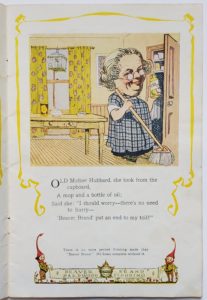 Old Mother Hubbard, she took from the cupboard,

A mop and a bottle of oil;

Said she: "I should worry - there's no need to hurry-

'Beaver Brand puts an end to my toil!"

There is no more perfect Flooring made than "Beaver Brand". No home complete without it. 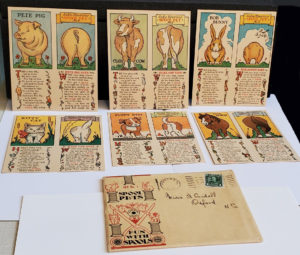 Six activity cards with the picture of the front and back of animals printed on them. Animals such as "Bob Bunny" and "Puppy Dog" are printed with a poem relating to the animal, as well as instructions for the activity. Children are meant to cut out the two outlines of the animals on the cards and affix each end to the correct sized spool (listed on the card) to create a "standing up animal"

In their original envelope addressed to a "Miss G. Sidall, Oxford, N.S." 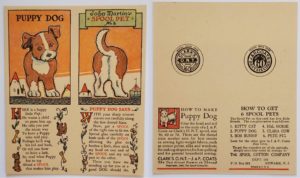 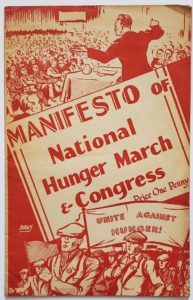 In 1921 the National Unemployed Workers Movement was set up by some members of the Communist Party of Great Britain. They fought for the unemployed workers of Great Britain and as part of their work they organized a series of hunger marches. These marches became popular during the 1930s as the Great Depression exacerbated unemployment. - Working Class Movement Library

The pamphlet, made for the 1934 Hunger March and Congress outlined the reasons behind the march (industrial exploitation, the health of the working class, and the callousness of the government among others), their demands (including a 40 hour work week), the call to action, and the schedule for the march.

"The unemployed want work, but not under conditions where they toil for the starvation benefit and relief scales. They want the right to work for wages and to live decently." 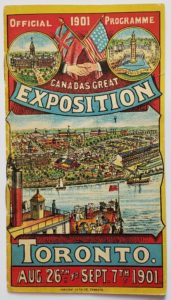 Original programs for the 1896 and 1901 Great Industrial Fair, which in 1912 changed its name to the Canadian National Exhibition (CNE). In its 17th and 23rd years, respectively, these programs provide information on Toronto, railways and hotels, and the fair and its events. Both feature beautifully illustrated colour covers by Hough & Harris Lithography (later Hough Lithography). 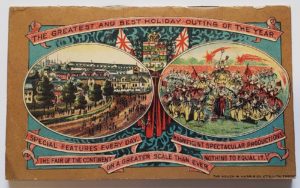